Teaching the youth to care an awful lot about the planet 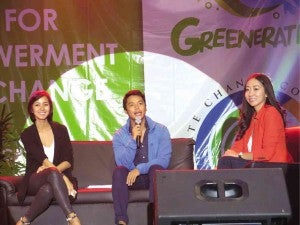 Young voices filled the room as YES-O (Youth for Environment in Schools Organization) Apolaki sang about initiating change and rapped about saving the environment.

The group, from Infant Jesus Montessori Center (IJMC) in Dasmariñas, Cavite, performed the original songs “Sama Sama” and “Pagbabago” at the 4th Greeneration Summit: A Gathering for Youth Empowerment on Climate Change.

As the horrors of Supertyphoon “Yolanda”  (international name: “Haiyan”) continue to haunt the nation, the youth, comprising majority of the population, has to be more educated and involved, Climate Change Commission (CCC) vice chair Lucille Sering said.

“We in the government cannot do everything by ourselves. We need you … to spread the word,” Sering told elementary, high school, college and graduate students from Metro Manila and parts of Luzon.

For YES-O Apolaki coach Rent Salimbao, the best way to spread environment advocacy is through music and social networking sites.

“You have to find ways to catch the attention of the youth and make them interested in environmental issues,” the chemistry teacher said.

Hoping to create a ripple effect, Sering told the delegates, “We want you to multiply on Facebook. Tweet. Be informative.”

“The best way to address the problem is to accept that it can happen,” Sering said. “Science [provides] us certainty about this phenomenon.”

In the current school curricula, climate change is only discussed in science classes. But, as calamities are  becoming more severe, experts have stressed the need to “mainstream” the subject.

“What you know will help you survive,” Sering said.

She said there were plans to make the topic a required subject even for nonscience majors.

Until that happens, the Greeneration summit is one of the vehicles used by environmental advocates to provide more young people a crash course on climate change. 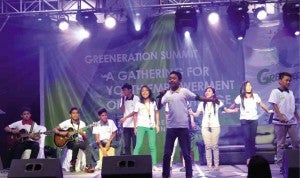 In an interview, Sering said the learning and sharing of knowledge would go beyond the summit as there would be a “follow through.”

Students and their advisers pledged to organize activities promoting climate change awareness in their respective schools, communities and the World Wide Web.

Grade 6 science teacher Erwin Donelo of College of the Immaculate Conception in Cabanatuan City said they planned to have his students talk on climate change at public schools.

Donelo said that after every conference, his organization, Children for Climate Change, made it a point to share what they had learned with the community.

His student, Rizviolet Balanquit, 11, said she “learned a lot of things … that I can apply in my daily life.”

The tips included using eco-bags for shopping, using less paper by recycling used paper and having one notebook for three subjects, conserving water by using a tabo (dipper) and energy by unplugging gadgets when fully charged and  switching off lights and  appliances when not in use.

Gonzalez added that it was more economical in the long run to invest in LED (light-emitting diodes) and converters and it was more fun to use mass transit and to carpool.

The ABS-CBN talent encouraged students to support eco-friendly products, clean coolers like electric fans and refrigerators at least once a week to lessen energy consumption, and read about environmental issues. And, more importantly, they should care for Mother Earth, she said.

“Unless someone like you cares a whole awful lot, nothing is going to get better. It’s not,” Gonzalez quoted the Lorax, a nature-loving character from the children’s book written by Dr. Seuss.

Paradas said he liked the idea that students received scholarships for helping protect the environment. Camarines Sur supports 10 scholars for every 2,500 trees planted. In 2012, it broke the Guinness World Record by planting 64,096 trees.

Zsahanie Paigan, 13, a Grade 8 student at IJMC, said she was inspired by the presentation of Mayor Carmela Alvarez of San Vicente, Palawan, on their quest to be an ecotown—a climate-resilient community.

Paigan hoped that the whole country would adopt the San Vicente framework to avoid devastation similar to Yolanda’s.

Alvarez said that with the help of Gawad Kalinga, they planned to put up a resort community that would not only shelter the people but also provide them with a livelihood.

“Each house will have a [business depending on the owner’s preference],” she said. It could be a barbershop, a sari-sari store or an inn for backpackers.

“We are teaching residents to be entrepreneurs,” the youngest chief executive of Palawan said. 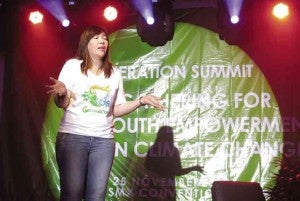 “Crowd-sourcing is the new form of bayanihan (teamwork),” Ressa said.

Obtaining information, services and ideas from a large group of people through social media proved helpful during the Yolanda crisis.

Social media gave youth the opportunity to help, she said, adding, “Your generation can do things that my generation only dreamt about.”