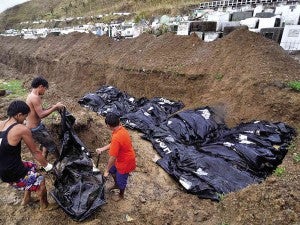 MASS BURIAL Policemen and volunteers bury some 100 bodies in a mass grave in the Tacloban City public cemetery on Thursday. RICHARD A. REYES

Last week, retrieval teams from government agencies and volunteer organizations recovered more bodies under the rubble, raising the possibility the number of dead could reach 10,000 as earlier estimated by a police official.

The official tally of the National Disaster Risk Reduction and Management Council (NDRRMC) remained at 5,632 dead, with 1,759 persons still missing. The 2,000 unidentified victims were among the 5,632.

In its latest advisory, the NDRRMC on Sunday said only 108 fatalities from Guiuan, Eastern Samar, and Matag-ob, Leyte, had been identified by their relatives.

The council said 26,136 individuals were injured by Yolanda.

More than 4 million people were displaced by the typhoon which destroyed 1,168,958 houses.

Some 214,000 individuals remained at 1,070 evacuation centers, while close to 3.9 million others would still need government assistance outside the relocation areas, the NDRRMC said.

The council put the damage caused by the typhoon at over P30.64 billion. In the agriculture sector alone, it said that Yolanda destroyed more than P15 billion worth of farm products in seven regions.

The government has provided more than P718 million in relief assistance, including more than 2.1 million food packs. International agencies and other countries have also helped and their aid value continued to rise.