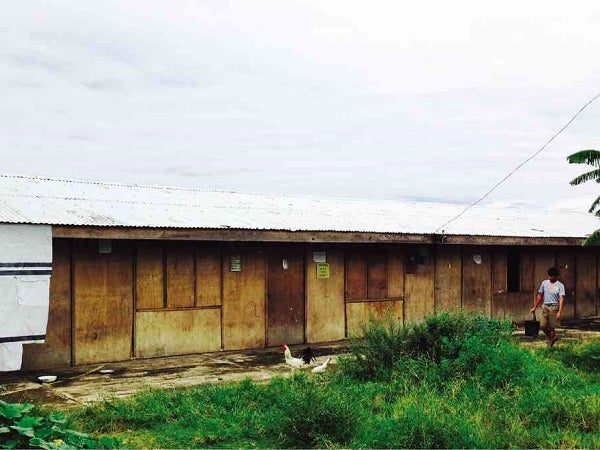 BUILT on an existing basketball court, this bunkhouse in San Rafael, Cateel town, Davao Oriental province, may be demolished when its remaining occupants move to their new homes. NICO ALCONABA

NEW BATAAN, Compostela Valley—Peering from the shelter tent, 25-year-old Marilou Amando changed the garment of her year-old son sprawled on his back, with only a piece of cardboard for a mat against the hard ground.

“Every time it rains, the place turns into a muddy mess. It’s difficult, particularly for the children,” she said.

Along with 104 other families, Marilou, her husband and their child are cramped in tents donated by international aid groups for the victims of Typhoon “Pablo” that hit this town and other parts of the province on Dec. 4 last year.

Relocating from their homes, which were washed away by a massive flood in Sitio Taytayan when Pablo slammed into the village of Andap, the Amandos and their neighbors have been calling the tents atop a plateau overlooking the New Bataan-Maragusan road as their new home for almost a year now. The place is some 3 kilometers from where their former homes once stood.

The Taytayan residents live in shelter tents and a 20-room wooden temporary bunkhouse built by the government at the plateau since Jan. 3, after the Mines and Geosciences Bureau (MGB)  declared their former community unsafe for habitation. Many of them lost their homes and livelihood when storm-induced flooding and a “debris flow” decimated most of Andap.

Residents said they were enduring the “dismal” living conditions at the upland “tent city” while holding on to the promise of permanent shelters from the government.

“The tents are already in a sorry state. Rainwater would seep in during downpour, and during sunny days, you’re like in an oven. We were told these shelters were supposed to be for six months only,” said Adelina Amodayon, a 35-year-old mother of two, and a neighbor of the Amandos.

Majority of the residents are farmers, and had to go down back to Taytayan to work on their vegetable plots.

“We have no other choice, or else our families would go hungry. We have to endure traveling every day to Taytayan, spending up to P40 for pedicab fare,” Marilou said. “In the meantime, we wait for the permanent houses being promised to us. We’re being told to wait or else we couldn’t get new permanent houses.”

Most of the evacuees are living in tents or in government bunkhouses built through the Department of Social Welfare and Development (DSWD) and local and international donors across the five towns, according to Josephine Frasco, provincial social welfare officer.

Frasco said the construction of the 1,380 permanent shelters in five towns was ongoing in five municipalities, with each house costing P70,000 including its labor component.

“The houses would be for those whose homes were destroyed by the storm. About 500 units of these houses are expected to be ready for occupancy by Dec. 4,” Frasco told the Inquirer in an interview.

About P96.6 million was allocated by the national government for the houses, but Frasco clarified thousands more permanent shelters were still to be built.

“We’re talking here of two to three years so all those made homeless by Pablo could recover. Actually, funds for the construction of over 17, 000 homes are already available,” she said.

A check with the provincial general services office (PGSO) revealed 600 permanent houses have also been built and completed by religious and nongovernment organizations (NGOs), both local and international.

Aside from the 1,380 units already being built, the government, through DSWD, also committed to build 5,000 housing units in the second stage of its modified shelter program, the PGSO data revealed.

But what about the Taytayan residents?

Frasco acknowledged that those in temporary “off-site” shelters would not be moving into their permanent houses soon.

The National Housing Authority (NHA), another government agency, is tasked to build the permanent shelters of Taytayan residents.

“Particularly in New Bataan, the problem is the lack of a relocation site safe enough for building a permanent settlement. But I think the NHA is doing its part,” Frasco said. “It’s just that finding a safe site where people can build their new homes is a big question owing to the MGB declaration (that many areas in New Bataan are geohazards).”

Aside from the tents and bunkhouses, the government and its partners also gave help to the typhoon survivors.

Temporary recovery shelters built with the help of organizations, such as the International Organization for Migration (IOM), International Committee of the Red Cross/Philippine Red Cross, Catholic Relief Service, have reached 1,507 units.

Of the 600 completed permanent shelters from NGOs and religious groups, Tagum diocese built 350 units in Monkayo while the Catholic Church-allied Gawad Kalinga constructed 100 houses in Monkayo and Laak.

Other completed permanent shelters were the 50 units for New Bataan by Mary Mediatrix Foundation, and some 100 houses by Davao Medical School Foundation.

The government, through DSWD, also built 252 bunkhouses in the five towns, while the Department of Public Works and Highways built eight bunkhouses for New Bataan.

For those with damaged homes, 19,512 emergency shelter kits were given by the provincial government and groups like IOM, Catholic Relief Service and Plan International. They also gave 738 tents and shelter boxes.

In his State of the Nation Address, President Aquino pledged 53,106 houses for the victims of Typhoon Pablo, with 17,609 expected to be completed by yearend and the rest by 2014.

Frasco, the provincial social welfare officer, said the government was able to deliver its promise despite the small number of houses being built using government funds.

“In our province, the reconstruction and recovery for those homeless could take up to three years. The system of securing the funding is not that easy so doing things would really take time. As to the promise made by the President, I think the government has delivered it,” she said.