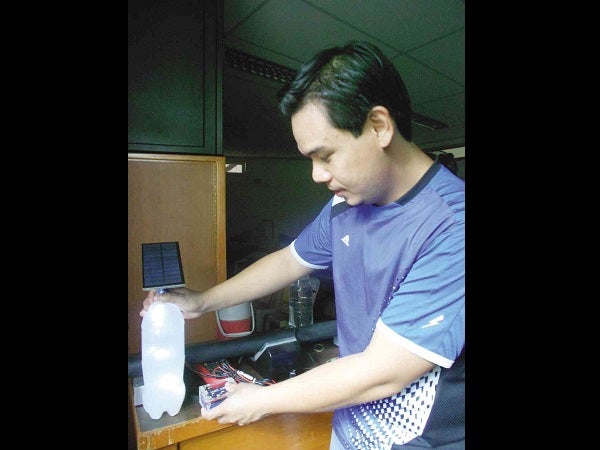 ENGINEER Josef Rene Villanueva, officer in charge of Ateneo de Davao’s Center for Renewable Energy and Appropriate Technology and a faculty member of the college of engineering and architecture, tinkers with a solar lamp and charger he designed to be part of a survival kit that the university wants to offer to local government units. GERMELINA LACORTE/INQUIRER MINDANAO

DAVAO CITY—Drawing lessons from both Supertyphoon “Yolanda” and Typhoon “Pablo,” the engineering department of a university here has designed a survival kit that has what its designers said are essential tools for disaster victims—a solar lamp, cell phone charger and water purifier.

Lourdesita Sobrevega-Chan, head of the research department of Ateneo de Davao University (Addu), said the kit would help people survive the aftermath of typhoons while they awaited the arrival of aid.

She said it was a product of technical and scientific expertise that Addu is offering to local governments and communities in preparation for the impact of stronger storms.

Chan said the impact of Yolanda on the Visayas and of Pablo on Mindanao prompted university engineers to work on a model kit that would help storm survivors cope with the lack of electricity and potable water.

“One of the key lessons we learned from Yolanda and Pablo is that when a strong storm flattens an area, light and water are out,” said Chan.

She said this prompted university engineers to experiment with solar panels and design the survival kit, “integrating all these things necessary for people to survive.”

Chan said the survival kit was designed to make it easily available, even to the poorest of the poor, with the help of local government units.

“Just think if all barangay captains have this. This can greatly boost the readiness of communities,” said

Fr. Daniel McNamara, SJ, an astrophysicist and dean of the School of Arts and Sciences at Addu, at a predisaster science forum dubbed, “Don’t be blown away, science will help save the day.”

“How to come up with a gadget with a water desalinator is very challenging,” said Chan. “But the engineers are doing it and, as much as possible, using indigenous materials so that it can be easily accessible to the poorest of the poor.”

McNamara said Yolanda and Pablo were proofs of what scientists have been predicting about global warming.

He said Pablo was a good example of how the earth’s climate has been so altered that weather phenomena that were once thought to be impossible are now the new normal.

“Pablo formed at 3 degrees above the equator, which is theoretically impossible according to old science, which says that you cannot have a storm that close to the equator,” said McNamara.

“But it happened, so it really proves that global warming is really changing things,” he said. Germelina Lacorte, Inquirer Mindanao