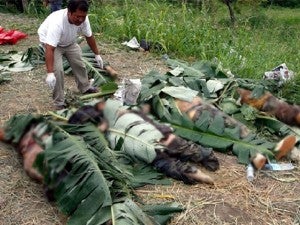 MANILA, Philippines—The Aquino administration is insulting slain journalists and their families by trying to downplay their deaths, according to the international group Human Rights Watch.

With another broadcaster killed on Friday, the administration must take another look at the situation of media personnel in the Philippines and should do something to improve the situation, said HRW Deputy Asia Director Phelim Kine.

Kine said the government should see to it that the latest incident, as well as all previous cases of media killings, are fully investigated.

Joash Digos, a blocktime commentator at Radyo Abante in Bukidnon, was shot dead on Friday evening.

Digos’ killing came on the heels of the commemoration of the 2009 Maguindanao massacre, in which 58 people consisting of members of the Mangudadatu clan, their supporters, and 32 media personnel were slain by armed men allegedly under the control of the Ampatuan clan, a political rival of the Mangudadatus.

Kine noted that according to media groups in the country, at least 24 media workers have been killed under the Aquino administration.

But he said it was “distressing” that the President’s spokesperson was playing down the killings.

The killings, the HRW official said, “tear at the fabric of the democracy the President’s mother helped to establish.”

News reports had quoted Communications Secretary Herminio “Sonny” Coloma as saying that if the media personnel slain in the Maguindanao massacre were taken out of the equation, the country would not be the most dangerous place for journalists, and that the problem was not that serious.

Coloma also said that not all of the victims had been proven to be bona fide journalists.

“It is insulting to the victims and their families that the Aquino administration has not only failed to deliver on its promise to end impunity for extrajudicial killings but also sought to downplay these attacks against media workers,” Kine said in a statement