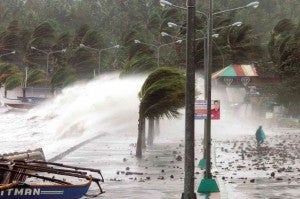 LEGAZPI CITY, Philippines—Flooding swept through a number of low-lying areas in this city and the neighboring town of Daraga as heavy rains poured on the province almost the whole day on Saturday, the Albay Disaster Risk Reduction and Management Council  said.

The council said rain  spawned by the Intertropical Convergence Zone triggered knee-deep floods in the Legazpi Port Area where the city’s  commercial center is located.

Albay Governor Joey Salceda suspended classes at all levels in the entire province due to the rain.

Afternoon flights to and from this city were cancelled due to low visibility, the disaster council said.

Salceda advised the public to stay home and forego visit to the malls, movie houses, and other entertainment or activity centers.

He also advised all municipal disaster councils in flood-prone areas to be on full alert and for rescue teams tyo be ready to get to work  in evacuations became necessary.

Roads in the Oro Site section of the city were not passable to all types of vehicles, while some areas in downtown Legazpi were passable only to medium and heavy vehicles, said Senior Inspector Arthur Gomez, Philippine National Police provincial spokesperson.

Legazpi City Mayor Noel Rosal said in an interview that the city’s DRRMC was on alert for possible preemptive evacuation of villagers living in low lying areas and those located at the foot of Mayon Volcano that could be in danger of lahar flow.

Gomez, in a report to the disaster council, said that as of 4 p.m., however,  all major roads and bridges from Libon town and the rest of the towns in Albay’s third district were passable, including roads  to Tiwi and to Sto. Domingo in the first district.

Cedric Daep, chief of the Albay Public Safety, Emergency and Management Office, told the Inquirer that the provincial disaster council had dispatched three military trucks to the third district of Albay where four towns and a city—Libon, Polangui, Oas, Guinobatan and Ligao City—are prone to flooding.