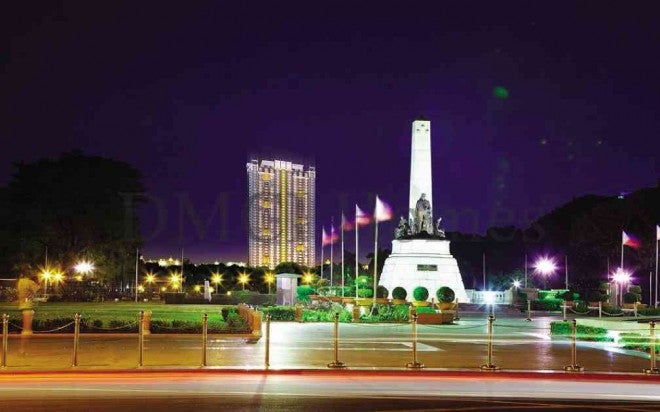 THE FUTURE Torre de Manila as visualized on a real estate company’s website in June 2012 from an angle which, according to heritage conservationists led by tour guide-activist Carlos Celdran, would spoil the view of the Rizal Monument.

Saying the “sacred sightline” to the monument of the national hero should be preserved, the Manila City Council on Tuesday passed a resolution calling for the temporary suspension of the building permit issued last year to the Torre de Manila condominium project near Rizal Park.

In a unanimous vote, the council sought the suspension to give due course to the online petition initiated by tour guide and activist Carlos Celdran against the structure he called “Terror de Manila.”

Celdran, an outspoken history buff known for hosting walking tours around Manila’s heritage sites from the Spanish colonial era, has been campaigning against the project on Taft Avenue since last year, saying it would mar the view of the Rizal Monument and the park built around it also known as Luneta.

The pedestalled statue of Dr. Jose Rizal, with an obelisk as backdrop and designated as Kilometer Zero on the Philippine road map, stands about a hundred meters east of the spot where the Filipino nationalist was executed by firing squad in 1896, on a bayside field known as Bagumbayan during the Spanish period.

“With so much rich history, Manila did right in taking a stand to preserve Rizal Shrine’s sacred sightline, showing clearly the city policy of valuing the importance of our cultural legacies,” said Councilor DJ Bagatsing, author of the resolution.

Bagatsing appealed to DMCI Homes, developer of the 41-story Torre, to respect the resolution’s binding authority and hold a dialogue with concerned stakeholders to iron out the issues and find a “delicate balance between heritage and modernization.”

“This sets a significant precedent which essentially ensures the integrity of our national monuments,” the councilor said.

The resolution cited the guidelines set by the National Historical Commission of the Philippines, which state that the visual dominance of national monuments like Rizal Shrine should be protected and given due prominence since they are of national significance.

“The vista points and visual corridors of the monuments must be clear for unobstructed viewing appreciation and photographic opportunities,” the resolution said.

It noted that DMCI was granted a permit by the previous city building official, Melvin Balagot, despite protests from heritage groups and an ongoing investigation by the council.

Sought for comment, Juan Capuchino, the new city building official, said he would have to review the context of the resolution and coordinate with DMCI concerning the councilors’ appeal.