A year later, no motive found in US school attack 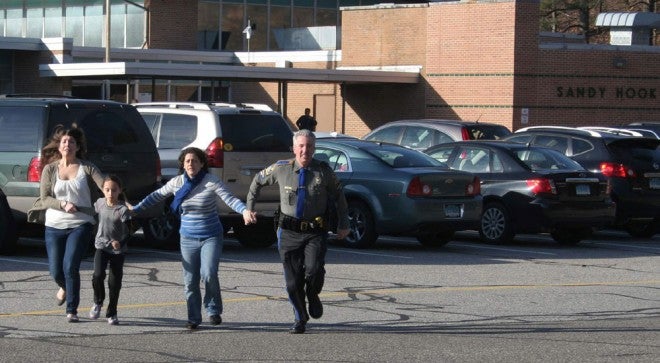 In this Friday, Dec. 14, 2012, file photo provided by the Newtown Bee, a police officer leads two women and a child from Sandy Hook Elementary School in Newtown, Conn., where a gunman opened fire, killing 26 people, including 20 children. A prosecutor is planning to release a report on the investigation into the massacre at Sandy Hook Elementary School on Monday, Nov. 25, 2013, but the public will have to wait longer for the Connecticut state police’s full accounting of the crime. AP

HARTFORD, Connecticut—Why a young gunman went on a murderous shooting rampage at a US school a year ago is still a mystery and may never be known with certainty, prosecutors said Monday in a report that ended their investigation.

Adam Lanza, 20, was obsessed with mass murders and the 1999 Columbine High School shooting in particular, but investigators did not find evidence he ever told others of his intentions to carry out such an attack, according to the summary report by the lead investigator, State’s Attorney Stephen Sedensky III.

Lanza killed 20 young children and six educators with a semi-automatic rifle inside the Connecticut school on December 14. He shot and killed his mother inside their home before driving to the school, and killed himself with a handgun as police arrived.

The shooting moved gun safety to the top of the agenda for President Barack Obama—though his gun control efforts have failed in Congress—and led states across the country to re-evaluate laws on issues including school safety.

The new report describes a gunman who had “significant mental health issues” but had knowledge of what he was planning: He had materials on mass murder, he smashed his computer hard drive, and he used earplugs during the shooting.

“The obvious question that remains is: ‘Why did the shooter murder 27 people, including 20 children?’ Unfortunately, that question may never be answered conclusively,” the report said.

Lanza “was undoubtedly afflicted with mental health problems; yet despite a fascination with mass shootings and firearms, he displayed no aggressive or threatening tendencies,” Sedensky wrote.

Lanza’s mother, Nancy Lanza, was concerned for her son and said he hadn’t gone anywhere in three months and would communicate with her by e-mail only, even though they were living in the same house. She never expressed fear that she or anyone was in danger from her son, the report said.

Sedensky said there was no clear indication why Lanza chose the school as the target other than the fact that it was close to his home.

The report said Lanza in 2005 was diagnosed with Asperger’s disorder—but “what contribution this made to the shootings, if any, is unknown.”

Asperger’s is an autism-like disorder that is not associated with violence.

Lanza might have hinted at his intentions online in the days before the massacre, the report indicated.

A Texas woman contacted police in Connecticut the day of the December 14 attack to say her son had interacted with someone while playing a videogame 20 hours earlier who said there would be a school shooting, according to the report. It wasn’t clear from the report whether she contacted authorities before or after the massacre.

Also, two days before the shooting, an anonymous user posted comments online about planning to commit suicide December 14 and saying it would make national news. The poster claimed to live in Connecticut.

But Sedensky said the hard drive taken from Lanza’s home was so damaged that data will probably never be extracted from it.

Donna Soto, the mother of slain teacher Victoria Soto, said in a statement that nothing could make sense of the shooting.

“Yes, we have read the report, no, we cannot make sense of why it happened. We don’t know if anyone ever will,” Soto wrote.

Documents with the report show Lanza wrote a violent book as a child that included passages in which a character shoots his mother in the head.

The homemade manuscript, titled “The Big Book of Granny,” was among items seized from Lanza’s home. There’s nothing to indicate Lanza ever handed the book in at school.

A week after US school massacre, details emerge

US gunman was loner who didn’t feel pain – teacher