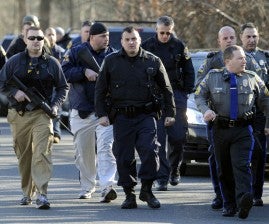 The first official said Adam Lanza was dead from a self-inflicted gunshot wound.

Both officials spoke on the condition of anonymity because they were not authorized to speak on the record about the developing criminal investigation.

According to the second official, the suspect drove to the scene in his mother’s car. Three guns were found — a Glock and a Sig Sauer, both pistols — and a .223-caliber rifle. The rifle was recovered from the back of a car. The two pistols were recovered from inside the school.

The official also said Lanza’s girlfriend and another friend were missing in New Jersey.