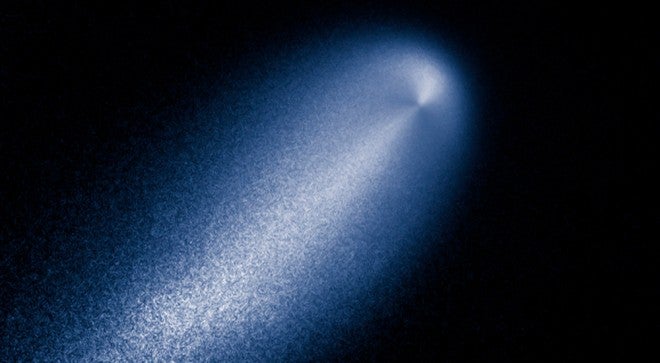 In this photo provided by NASA, a contrast-enhanced image produced from the Hubble images of comet ISON taken April 23, 2013 reveals the subtle structure in the inner coma of the comet. In this computer-processed view, the Hubble image has been divided by a computer model coma that decreases in brightness proportionally to the distance from the nucleus, as expected for a comet that is producing dust uniformly over its surface. ISON’s coma shows enhanced dust particle release on the sunward-facing side of the comet’s nucleus, the small, solid body at the core of the comet. This information is invaluable for determining the comet’s shape, evolution, and spin of the solid nucleus. AP

CAPE CANAVERAL, Florida – For months, all eyes in the sky have pointed at the comet that’s zooming toward a blisteringly close encounter with the sun.

The moment of truth comes Thursday.

The sun-grazing Comet ISON, now thought to be less than a mile (1.6 kilometers) wide, will either fry and shatter, victim of the sun’s incredible power, or endure and quite possibly put on one fabulous celestial show.

Talk about an astronomical cliffhanger.

Even the smartest scientists are reluctant to lay odds.

Should it survive, ISON, pronounced EYE’-sahn, would be visible with the naked eye through December, at least from the Northern Hemisphere. Discernible at times in November with ordinary binoculars and occasionally even just the naked eye, it already has dazzled observers and is considered the most scrutinized comet ever by NASA. But the best is, potentially, yet to come.

Detected just over a year ago, the comet is passing through the inner solar system for the first time. Still fresh, this comet is thought to bear the pristine matter of the beginning of our solar system.

It’s believed to be straight from the Oort cloud on the fringes of the solar system, home to countless icy bodies, most notably the frozen balls of dust and gas in orbit around the sun known as comets. For whatever reason, ISON was propelled out of this cloud and drawn toward the heart of the solar system by the sun’s intense gravitational pull.

The closer the comet gets to the sun, the faster it gets.

On Thursday, the comet will zip within 730,000 miles (1,175,000 kilometers) of the sun, less than the actual solar diameter. In other words, another sun wouldn’t fit in the missed distance.

Whether it survives or is torn apart, earthlings have nothing to fear.

The comet will venture no closer to us than about 40 million miles (64 million kilometers), less than half the distance between Earth and the sun. That closest approach to Earth will occur Dec. 26. Then it will head away in the opposite direction forever, given its anticipated trajectory once it flies by the sun.

ISON is named after the International Scientific Optical Network, used by a pair of Russian astronomers to detect the comet in September 2012. But it officially is known as C/2012 S1, a designation indicating when it was discovered.

Take heart: The “C” means it is not expected here again.

NASA wasted no time jumping on ISON. The space agency’s Deep Impact spacecraft observed ISON back in January from a distance of about 500 million miles (800 million kilometers).

Since then, the observations have stacked up.

“Every spacecraft that has a camera, we’re turning on it,” said John Grunsfeld, NASA’s science mission director.

The newly launched Maven spacecraft en route to Mars will gaze at ISON the second week of December, once its ultraviolet instrument is up and running.

“That’s well after closest approach to the sun,” the University of Colorado’s Nick Schneider, who’s in charge of the instrument, said in an email. So it’s not known “whether we’ll see a comet, comet bits or the last wisps of comet vapor.”

Whatever happens, it’s bound to be interesting. The quip from my colleagues is, ‘Comets are like cats: They have tails and do whatever they want.'”

Besides ISON, NASA is spying on Comet Siding Spring, another Oort cloud comet discovered in January by the Australian observatory of the same name. Siding Spring will pass within tens of thousands of miles of Mars next October, so close that scientists believe the coma of the comet — its thin but expansive atmosphere — will envelop the red planet.

“It will be blanketed in water and dust and meteorites. It moves like 50 kilometers per second, blazing through the environment,” said Jim Green, director of NASA’s planetary science division. That’s more than 110,000 mph, (177,000 kph) so the comet will be gone from Mars “pretty quick.”

Siding Spring-type events have happened before, Green noted. “We’re just lucky in our lifetime” to have the right spacecraft in the right place to observe the spectacle.

The same applies to ISON.

Add small sounding rockets to the list of paparazzi chasing the comet; NASA fired up one from New Mexico on Wednesday with an ultraviolet telescope that reached 172 miles (277 kilometers) high before descending by parachute. Consider all the ground observatories peering at the comet, as well as countless amateur astronomers and astrophotographers, and ISON has become the belle of the cosmic ball.

“Comets evolve from the time they start brightening until they go all the way around the sun, and go back out,” Green said. “By having and leveraging these assets, it really gives us that view — that unique view — that we couldn’t get otherwise.”

Some sky gazers speculated early on that ISON might become the comet of the century because of its brightness, although expectations have dimmed over the past year.

Scientists expect to know ISON’s fate fairly quickly. At least three spacecraft will be aiming that way in real time.

If ISON survives, “it’s going to fly right over the Northern Hemisphere,” Green said with clear excitement in his voice. It should be visible with the naked eye for 30 days.

“So it’s really a holiday comet. You ought to be able to see it well past Christmas,” Green said. “But it’s got to survive it, that’s the only thing about that.”