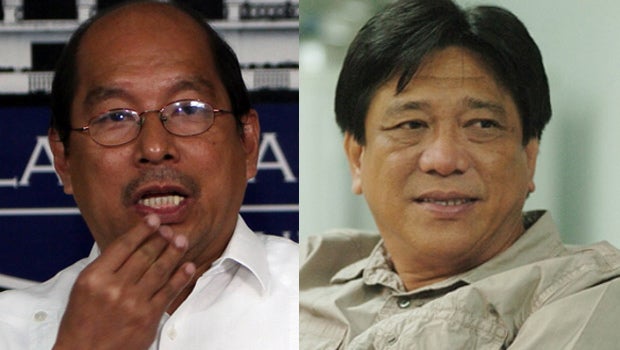 MANILA, Philippines—The National Bureau of Investigation is looking into the release by the Department of Budget and Management (DBM) of a dubious special allotment release order (Saro) to mayors for P879 million worth of farm-to-market roads, which alert regional officials in the Department of Agriculture (DA) found as having bogus signatures.

The office of Budget Secretary Florencio Abad has imposed a news blackout on the NBI’s ongoing investigation of the fake Saro case, which two INQUIRER sources occupying key posts in the DBM and the DA believe is just the tip of the iceberg of a multibillion-peso extortion racket which has persisted through several administrations up to the present.

The two sources declined to be named for lack of authority to speak on the matter.

In a phone interview, Agriculture Secretary Proceso Alcala confirmed that his department had asked the DBM to invalidate the P879-million Saro after his regional directors found that the signatures endorsing the release of the facility were fake.

The Saro was issued in October in spite of widespread outrage over pork barrel abuses revealed in July. The document was uncovered last month.

“My directors informed me that an assistant secretary at the DBM had disowned signing the Saro. A number of mayors also complained that DBM officials were calling them, asking for money in exchange for prioritizing the release of the Saro,” Alcala said.

The agriculture secretary did not name the officials or the amount of kickbacks involved.

Assistant Budget Secretary Luz M. Cantor did not sign the Saro because she wanted to make sure this went through the proper channels, according to one DBM source. Her signature in the Saro was forged, according to this source.

“We believe there is an extortion syndicate operating inside the DBM,” said Alcala, who revealed that DA officials nationwide had been alerted to activities of dummy nongovernment organizations (NGOs) and forged signatures appearing on state documents like Saros.

The alert was triggered by disclosures in July of an alleged P10-billion racket that over the past decade had siphoned off allocations from the congressional Priority Development Assistance Fund and the Malampaya Fund to fake NGOs and ghost projects.

Businesswoman Janet Lim-Napoles and Senators Juan Ponce Enrile, Jinggoy Estrada and Ramon Revilla Jr. are under investigation in the Office of the Ombudsman in connection with the racket. They have denied involvement in the alleged scam.

Alcala said that after canceling the Saro, he urged the DBM to ask the NBI to order an investigation.

The Inquirer informed Abad’s office and requested comment for the story. In reply, Abad’s aide asked that the Inquirer hold off publication of the report, saying this could jeopardize a DBM inquiry.

Commission on Audit (COA) Circular 96-002 defines a Saro as “a specific authority issued to one or more identified agencies to incur obligations not exceeding a given amount during a specified period for the purpose indicated. It shall cover expenditures, the release of which is subject to compliance with specific laws or regulations or are subject to separate approval or clearance by competent authority.”

A Saro is regarded as the “most important document in the government because it serves as the bible of all payments to be made by the State,” according to a DA source.

The source said the NBI had made two visits to the DBM central office to determine responsibility for the P879-million Saro racket.

A DA source said the fake Saro specified the release of funds to dozens of farm-to-market road projects that cost between P1 million and P15 million. These projects are prone to corruption and are difficult to audit because these are prone to being washed out.

The DBM source noted that even if a local government project had been allocated money in the national budget, the release of these funds was controlled by a syndicate in the agency, which demanded advance payments to expedite the issuance of the Saro, even if it meant issuing a forged document.

The same source said the Saro extortion racket was likewise prevalent in projects under the Department of Public Works and Highways.

The DBM source said that with the Saro in hand, the mayors would then go to their contractors for advances on their kickbacks.

In its annual audit report on Nov. 15, the COA cited deficiencies in the DBM’s haphazard inventory of Saros, notices of cash allotments (NCAs) and other security papers.

The shortcomings include delayed submissions, differences in the ending balances, use of per box instead of per piece in reporting the amount of Saros in the possession of DBM personnel, and failure to report or mark spoiled or damaged Saros and NCAs.

The COA said failure to mark these forms as spoiled or damaged, as required by law, had not eliminated the possibility of fraudulent use.

In reply, the DBM claimed that some of the spoiled Saros were shredded due to the confidentiality of the release of these documents. But it promised the COA it would comply with its requirement for full reporting.

The COA also scored the DBM for gaps in the numbering sequence of its Saros and NCAs. It noted that it had notified the DBM of these serious discrepancies since 2011, the first full year of the Aquino administration.

In its reply to the COA, the DBM said it did not monitor Saros and NCAs by their numbers but by the amount of releases (except for those released manually), and dismissed the gaps in numbering sequences to a systems error.

The private operator of its information technology system, Incuventure Partners Corp., claimed that it did not report these systems error because the DBM management did not require it. The DBM would later reveal that some of these gaps were due to cancellations.

The COA said this practice was “not indicative of a sound internal control practice.”

In a follow-up report to the audit agency in March this year, the DBM said it had put in place the appropriate control system for the errors. It claimed that it had submitted the list of canceled Saros to the COA, which has denied receiving such a list.