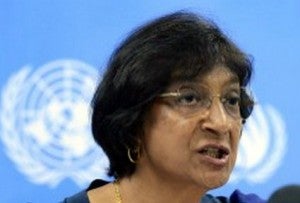 BAGHDAD–Iraq has confirmed seven more executions, pushing the number of people put to death this year to more than 150 in defiance of widespread international condemnation.

Those executed, who included a Libyan, had all been convicted of offences related to “terrorism”, a statement posted on the justice ministry website on Thursday said.

They bring to at least 151 the number of people put to death by Iraqi authorities this year, compared to 129 for all of 2012, according to an AFP tally based on reports from the ministry and officials.

The statement, which was accompanied by an image of a noose, listed 19 executions between November 7 and 17, but 12 of them had already been announced by a ministry official earlier this week.

The statement named the Libyan put to death as Adel Omar Mohammed, adding that he had been convicted of carrying out two car bombings.

In a departure from its normal practice, the ministry published the names of those executed, and the offences they had been found guilty of.

Executions in Iraq, usually carried out by hanging, have increased this year despite persistent international calls for a moratorium.

She highlighted “numerous convictions based on confessions obtained under torture and ill-treatment, a weak judiciary and trial proceedings that fall short of international standards.”

“The application of the death penalty in these circumstances is unconscionable, as any miscarriage of justice as a result of capital punishment cannot be undone,” Pillay said.

But Iraqi Justice Minister Hassan al-Shammari has insisted that the executions are carried out only after an exhaustive legal process.

The growing use of the death penalty comes as violence in Iraq has reached a level not seen since 2008, when the country was just emerging from a brutal sectarian conflict.

More than 5,800 people have died so far this year in surging unrest that has prompted Iraq to appeal for international help in combating militancy.

But diplomats and analysts say that Baghdad has not done enough of its own to address the root causes of the bloodshed.