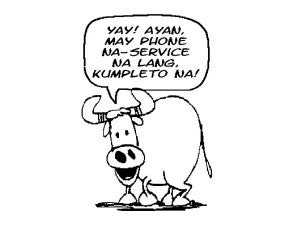 It’s raining satellite phones, the equipment that the agency tasked with setting up a national early warning system does not have.

Satellite phones have become a lifeline in large swaths of the Visayas where Supertyphoon “Yolanda” toppled power lines, shutting down not only electricity but also cell phone service.

The United Nations is set to donate additional communications equipment to support relief operations in the Eastern Visayas and connect survivors with their families outside the disaster area.

In a statement, the International Telecommunication Union (ITU), the UN telecommunications agency, said it would deploy an additional 50 satellite phones to complement 40 earlier deployed to support health relief efforts of the World Health Organization (WHO) in typhoon-ravaged areas.

The communications equipment will also be used “to help people reestablish contact with their family members in other cities of the Philippines and abroad.”

“At a time when the Philippines is recovering from the Yolanda (international name: ‘Haiyan’) crisis, relief efforts by UN humanitarian agencies are much needed to assist victims in the affected towns and villages,” said Hamadoun Touré, secretary general of the Geneva-based agency.

At a Senate hearing on Wednesday, defense officials acknowledged that the National Disaster Risk Reduction and Management Council (NDRRMC) had no satellite phone. The NDRRMC also lacked a generator and tents.

“In dire situations such as the one in the Philippines, ITU stands ready to support UN agencies in their humanitarian effort to assist people caught up in such disasters, especially those who have been afflicted by illness and those who have been displaced from their homes,” said the official.

Richard Brennan, WHO director of Emergency Risk Management and Humanitarian Response, cited the importance of reliable communication lines for medical operations in the disaster area, one that had been a “major resource gap” for relief workers on the ground.

“These satellite phones will be of tremendous benefit to our humanitarian operations in support of the Philippine (Department) of Health, as well as WHO and its partners, helping us gather and manage information for disease surveillance, early warning systems and sectoral coordination,” Brennan said, as quoted in the UN statement.

Julie Lyn Hall, WHO country representative in the Philippines, had said in a briefing in Manila that illnesses related to unsanitary living conditions and limited water supply in disaster areas were a concern, particularly “diarrheal illness and leptospirosis.”

Some 43 international medical groups and 44 local teams have fanned out across the disaster zone to provide urgent medical attention to survivors since hospitals and clinics in the area have been damaged.

The UN estimates that some 13 million people were affected by Yolanda, with roughly 4 million displaced and 2.5 million in need of food aid.

The Philippine government estimates that at least 4,000 people were killed, making the typhoon one of the deadliest disasters to hit the country.

Disaster body lacks satellite phones, others in case of another ‘Yolanda’