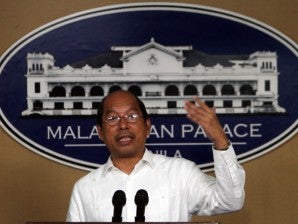 MANILA, Philippines—Budget Secretary Florencio Abad should explain why he should not be cited in contempt for violating the Supreme Court’s restraining order against the disbursement of Priority Development Assistance Fund (PDAF) for 2013.

On Sept. 10, 2013, the high court issued a restraining order against the use of PDAF and the Malampaya Funds for non-energy related projects.

“The DBM Secretary, in issuing the DBM Letter Circular in contravention of the TRO, should be directed to explain why he should not be held in contempt and penalized for disregarding the TRO,” Associate Justice Arturo Brion said in his 20-page separate concurring opinion.

“That the funds that may have been released by virtue of the DBM Circular Letter may involve measly sums of money is beside the point: public funds are merely held in trust by the government for the public good and must be handled in accordance with law,” Brion said.

“Additionally, that the apparent violation may have been made by a high ranking official of the government cannot serve as an excuse, for no one is above the law and the Constitution,” Brion said.

Voting 14-0, the high court declared as unconstitutional the PDAF commonly known as the “pork barrel fund” and all the laws that created it.

The high court also prohibited the future creation of laws to revive the said fund.