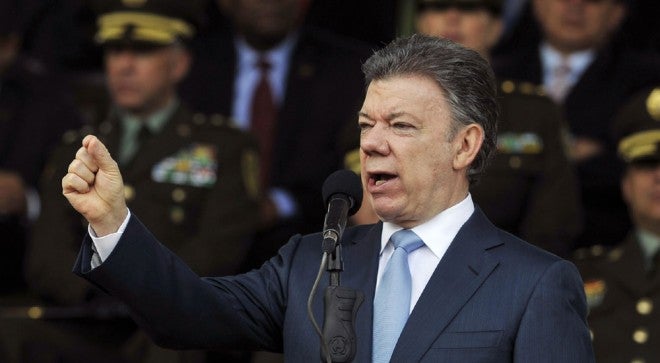 In this Nov. 6, 2013 file photo, Colombia’s President Juan Manuel Santos speaks during a graduation ceremony for police cadets in Bogota, Colombia. Santos announced on Wednesday, Nov. 20, 2013 that he will run for reelection in 2014. AP

The announcement had been widely expected and victory would give the 62-year-old president four more years to pursue peace negotiations that he launched with the leftist Revolutionary Armed Forces of Colombia rebels.

Santos made the announcement Wednesday night. He was first elected president in 2010.

A recent poll puts Santos ahead of four other possible candidates for the May election, but with a relatively low support level.

The poll by Invamer-Gallup says 27 percent of people surveyed said they would vote for Santos, with former Interior Minister Oscar Ivan Zuluaga in second place at 15 percent. The poll questioned 1,200 people between November 1 and 6, and had a margin for error of three percentage points.