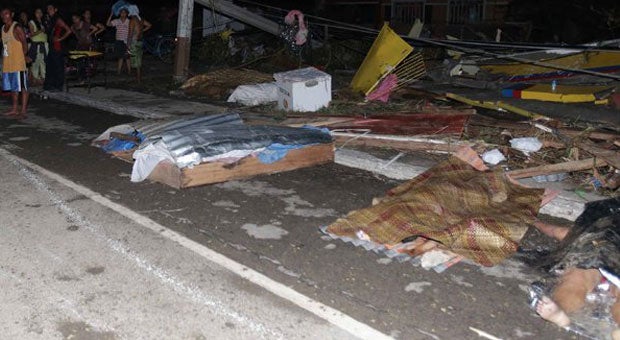 Residents stand beside dead bodies that lie on the street after powerful Typhoon Haiyan slammed into Tacloban City, Leyte province central Philippines on Nov. 9, 2013. The national disaster agency has stopped releasing the updated casualty number from Tacloban and the rest of the Eastern Visayas after placing on Wednesday, Nov. 20, the latest official death toll from Supertyphoon “Yolanda” at 4,011 people. AP FILE PHOTO

While relief operations have gained speed over the past days, counting the dead, missing and injured has stalled.

The national disaster agency has stopped releasing the updated casualty number from Tacloban City and the rest of the Eastern Visayas after placing on Wednesday the latest official death toll from Supertyphoon “Yolanda” at 4,011 people.

The official death toll did not reflect the 1,172 bodies that a 300-member task force collected from the streets of Tacloban City from Nov. 16 to 19.

The council reported only 694 dead in Tacloban, a number that has been unchanged since Nov. 13, or five days after Yolanda devastated large swaths of the Visayas and parts of northern Palawan province.

NDRRMC Executive Director Eduardo del Rosario said the council was not updating the death toll from the Eastern Visayas because it had changed the policy on accounting for the dead.

“The count that should be submitted should be duly signed by the local chief executive and the city health officer,” he told reporters on Wednesday.

When reminded of his earlier claim that the NDRRMC had to validate the field report first before updating its official tally, Del Rosario said he was just following orders.

“That is the directive of the Task Force (Yolanda), that it will be the basis of the official count,” said the head of the agency that is supposed to coordinate all government disaster response.

On Friday, Del Rosario said no other agency would release the official death toll after the United Nations Office for the Coordination of Humanitarian Affairs reported a higher death toll.

Three days after Yolanda struck, President Aquino rejected the estimate that at least 10,000 could have died from the strongest typhoon recorded in history. Aquino gave his own estimate of 2,000 to 2,500 dead.

Days later, the Eastern Visayas regional police director who was quoted as placing the death toll at 10,000 was relieved of his post.

Most of the casualties on official count were from the Eastern Visayas where 3,725 were confirmed dead, according to the NDRRMC.

In the rest of the affected regions, the NDRRMC confirmed 113 dead in Western Visayas; 72 in Central Visayas; five each in Bicol and Mimaropa; two in Calabarzon; and one each in Caraga and in the Zamboanga Peninsula.

Left on the city’s streets since Yolanda struck, the 1,172 bodies that were collected starting Nov. 16 in Tacloban have been brought to the mass burial site.

The commander of the group dubbed Task Force Cadaver, which was created last Saturday, has been reporting daily to national government officials in Tacloban.

A total 780 bodies were recovered last Saturday, 125 on Sunday, 151 on Monday and 116 on Tuesday, according to Senior Supt. Pablito Cordeta, director of the Bureau of Fire Protection-Eastern Visayas.

Cordeta said the mass grave was about six meters deep and the bodies were piled five-deep. Another mass grave has to be dug soon.

Except for five firefighters from Tacloban and Tanauan, all the 3,725 dead officially reported in Eastern Visayas were unidentified. All the 1,573 missing and 17,821 injured from the region were also unidentified.

Cordeta said his group would complete the task of recovering bodies in Tacloban before it moved to other municipalities.

The task force has about 300 members from 12 different agencies.

“We believe that there are victims under the debris. But there are no more bodies visible to the passersby,” he said.

The International Committee of the Red Cross (ICRC) on Wednesday said it had reached an agreement with the Department of Health (DOH) and the National Bureau of Investigation (NBI) on the mass burial of those who perished from Yolanda.

For Tacloban, the ICRC said the authorities had agreed to follow guidelines for the “management of the dead” developed jointly by the ICRC and the World Health Organization (WHO). The ICRC is closely coordinating its forensic work in the Philippines with the WHO through the DOH and the NBI.

“There are certain procedures that should be followed to preserve the dignity of the victims and facilitate their identification.

“The dead should be properly collected and placed in temporary burial places, to allow for forensic investigation later.

Photographs should be taken, and any descriptive information and postmortem data should be recorded,” said Andres Patino, the ICRC expert in humanitarian forensic action and the first forensic specialist to arrive in Tacloban.

The ICRC, in a statement, said its agreement with the DOH and local authorities in Tacloban for an emergency plan for the proper management of the dead takes into account the scarcity of available resources.”

The guidelines are contained in the “Management of Dead Bodies after Disasters: A Field Manual for First Responders” co-published by the ICRC in 2009.

The guidelines, among others, call on authorities to designate one or more persons in charge of body recovery; storage; identification; information and communication; disposal; support for families; and logistics.

The ICRC also reiterated that there was “no public health justification for rapid mass burials.”

Contrary to what many people believe, the bodies of those who die in a natural disaster do not cause epidemics, and they are a negligible health hazard.

The group said it was probable that most victims of Yolanda died of injuries, drowning or fire, and were not likely to have had epidemic-causing diseases such as cholera, typhoid, malaria or the plague when they died.

“There is only a small risk of developing diarrhea by drinking water contaminated by the corpses—a risk smaller than that caused by the living—and that risk can be eliminated by routinely disinfecting and/or boiling water to prevent the spread of water-borne diseases.

“In any case, most people avoid drinking water from any source that may have been in contact with dead bodies or other causes of contamination,” Patino added.

The ICRC said hasty and uncoordinated burials of the dead without proper identification can be very painful for the bereaved.

“Improper and undignified management of the dead can traumatize families and communities, and may have serious legal consequences, as it may be impossible to recover and identify the remains later. The victims will simply be missing,” the group said.

Nancy Fournier, a member of the ICRC delegation in Manila and in charge of protection, said careful handling of the remains was important during disasters.

Some 35,000 people in the Philippines and abroad have so far asked the Philippine Red Cross to trace family members who have gone missing since Yolanda’s onslaught.—With a report from Jerome Aning