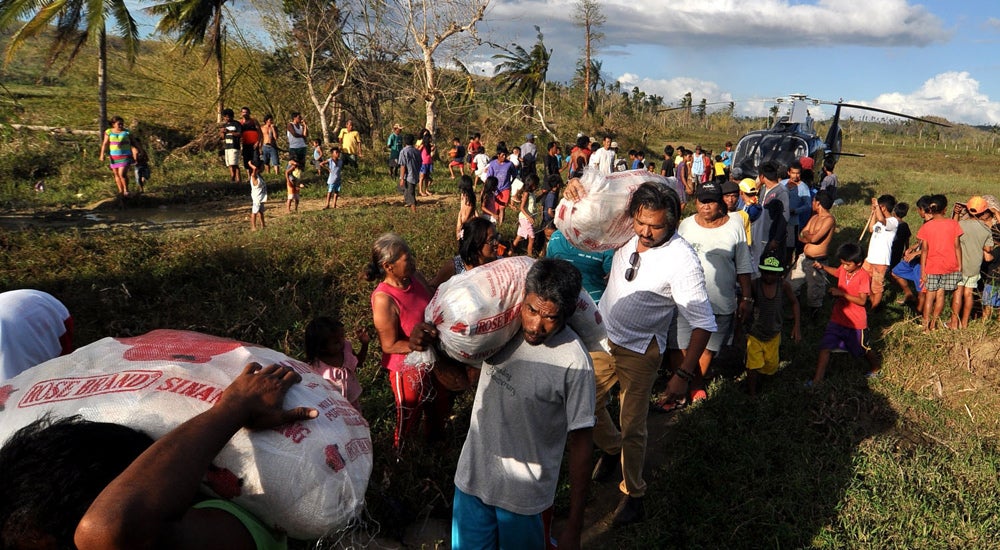 INQUIRER MISSION. Relief donated through the Philippine Daily Inquirer is delivered to typhoon victims in Sta. Rita, Samar province, flown there on a helicopter owned by Benguet Corp. whose chair, president and CEO Philip Romualdez (center) carries one of the sacks. RICHARD A. REYES

BASEY, EASTERN SAMAR—Two helicopters carrying relief from the Inquirer Team were mobbed upon landing by hungry survivors of Supertyphoon “Yolanda” in the devastated town of Basey, Samar province, which was repeatedly battered by the tsunami-like storm surges spawned by the monster howler.

As soon as the first helicopter touched down, it had to quickly seek the safety of the skies as people came in droves—children, their parents, teenagers and the elderly.

Then the second one—a bigger one that carried the bulk of the load—finally landed.

But asking the survivors to queue up was next to impossible, forcing the Inquirer Team led by Philip Romualdez, the husband of Inquirer president Sandy Prieto-Romualdez, to seek the intervention of barangay (village) captain Arnolfo Marcha and Cpl. Danilo Academia, who happened to be on the site.

The team then headed south to the town of Sta. Rita, Samar, a kilometer away from San Juanico Bridge, where it spotted an “SOS” message: “Pres PNoy kaunting tulong po (President Aquino, a little help please).”

The message was scrawled on a sackcloth by Rosalia Ansuas, a mother of two.

Ansuas told the Inquirer that she had decided to put up the SOS sign because they had grown tired of seeing truckloads of relief coming to and from Tacloban City since last week.

Not a single truck or van bothered to pull over in Barangay San Pedro, a village of farmers along the national highway connecting San Juanico Bridge and Basey town.

“They just pass by, unmindful of our dire situation,” Ansuas said.

“I put up the sign so that the government and other people could hear our plea for help,” she said.

“I never thought that kind-hearted people would come to us one day. It’s just unbelievable,” said Malou Ada, a former barangay official.

The whole village, with their barangay captain, couldn’t believe what they were seeing.

Sacks of relief “fell from the sky,” as one said.

They couldn’t stop thanking the Inquirer Team, but this reporter said: “God heard your prayers. We’re here to help one another. Please share it with everyone, however little. We’ll be back soon with more.”

Donors quick to respond to Inquirer plea for aid