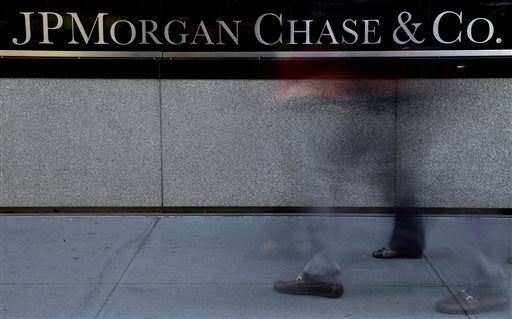 The JPMorgan Chase & Co. logo is displayed at their headquarters in New York, in this Monday, Oct. 21, 2013, file photo. A person close to the talks says the Justice Department and JPMorgan Chase & Co. have reached agreement on all issues in a $13 billion settlement of a civil inquiry into the company’s sales of low-quality mortgage-backed securities that collapsed in value in the financial crisis. AP

WASHINGTON DC, USA- The Justice Department and JPMorgan Chase & Co. have settled all issues and could sign a $13 billion agreement as early as Tuesday that would be the largest settlement ever reached between the government and a corporation, a person familiar with the negotiations says.

The deal is the latest chapter in the bursting of the housing bubble in 2007, when JPMorgan and others among the largest U.S. banks sold low-quality, mortgage-backed securities that collapsed in value. Investors were left with billions of dollars in losses.

In blunt criticism of those banks, the Justice Department’s No. 2 official said Monday that too many financial institutions had failed in their duty to ensure that their businesses were run cleanly.

Recounting the conduct that JPMorgan and other banks engaged in, Deputy Attorney General James Cole told the American Bankers Association that too many supervisors incentivized excessive risk taking, knowing that risky products “could be unloaded down the road, … leaving someone else to deal with the consequences.”

According to the person familiar with the talks between JPMorgan and the Justice Department, the final issue in the settlement revolved around the $4 billion to compensate consumers. Some $1.5 billion will be a write-down to reduce the principal of homeowner loans; $300 million will enable homeowners to pay less now on their mortgages; and the remainder of the $4 billion will go toward reducing mortgage interest rates, originating new loans and helping revive blighted properties in some of the hardest hit areas of the housing crisis, such as Detroit. An independent monitor will be appointed to oversee the assistance to homeowners.

The person familiar with the negotiations spoke on condition of anonymity because the deal had not been finalized. When it is signed, it will eclipse the record $4 billion levied on oil giant BP in January over the worst offshore oil spill in U.S. history.

Another person familiar with the talks, also speaking only on condition of anonymity, said the two sides were “very close” to a final agreement.

Still to come is a decision on whether the Justice Department will file criminal charges against JPMorgan. An investigation is under way by the U.S. Attorney’s office in Sacramento, California.

The nation’s biggest bank will pay more than $6 billion to compensate investors, pay $4 billion to help struggling homeowners and pay the remainder as a fine.

JPMorgan has said most of its mortgage-backed securities came from Bear Stearns Cos. and Washington Mutual Inc., troubled companies that JPMorgan acquired in 2008.

As part of the $6 billion to investors, $4 billion will resolve government claims that JPMorgan misled mortgage finance giants Fannie Mae and Freddie Mac about risky mortgage securities the bank sold them before the housing market crashed. That part of the deal was announced Oct. 25. Fannie and Freddie were bailed out by the government during the crisis and are under federal control.

The Justice Department and the banks reached a tentative settlement in mid-October on the $13 billion, but the negotiations hit a stumbling block that has now been resolved. As part of any settlement, JPMorgan wanted to be able to collect money from a receivership involving Washington Mutual Inc., the biggest U.S. savings and loan. The S&L failed and was purchased by JPMorgan. The Federal Deposit Insurance Corp., which maintains stability and public confidence in the banking system, said JPMorgan should be responsible for any liabilities regarding the Washington Mutual acquisition. Under the arrangement, JPMorgan cannot seek reimbursement from the FDIC for any part of the deal, the person close to the talks said Monday night.

The $13 billion JPMorgan settlement amount is only about half of its record 2012 net income of $21.3 billion, or $5.20 a share, which made it one of the most profitable U.S. banks last year.

Mounting legal costs from government proceedings pushed JPMorgan to a rare loss in this year’s third quarter, the first under CEO Jamie Dimon’s leadership. The bank reported Oct. 11 that it set aside $9.2 billion in the July-September quarter to cover the string of legal cases against the bank. JPMorgan said it has placed $23 billion in reserve to cover potential legal costs.

On Friday, the company announced it had reached a $4.5 billion settlement with 21 major institutional investors over mortgage-backed securities issued by JPMorgan and Bear Stearns between 2005 and 2008. The investors, which include Goldman Sachs, said the bank deceived them about the quality of high-risk mortgage securities.