Unleashing the creative and innovative mind 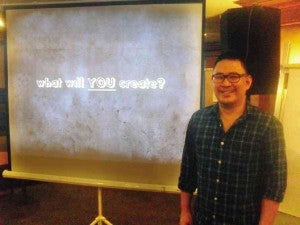 For media practitioners who have deadlines to beat every day, coming up with an idea and delivering the news in a creative manner are recurring challenges.

A recent seminar on creativity and innovation was organized to address the problem.

“Not a lot of people know what innovation really is,” said Aaron Palileo, a member of the BA faculty.

He started the short training program by introducing the concept of innovation as an “impactful improvement,” adding that it had to be “desirable, viable and feasible.”

Palileo then discussed four innovation processes that a person or an institution must follow.

The first is inspiration, usually triggered by either a problem or an opportunity. When inspiration strikes, the next step is ideation or the process of generating ideas.

After pulling together all ideas generated, it is time to incubate or choose which ones are good or can solve the problem at hand.

The fourth and final process is implementation.

Palileo said innovation should always go hand in hand with creativity, which he described as the “ability to create new ideas.”

“Creativity is thinking of new things; innovation is doing the new things,” he said, adding that the former fueled the latter.

For Palileo, to be creative means an idea should “differ, deliver and delight the senses.”

As participants of the workshop took down notes or nodded in agreement, Palileo discussed the two keys to creativity.

The first one, he said, is to connect with other “great” individuals. “Normal people are boring … to create ideas, connect with rebels,” he said.

He described rebels as either fanatic or apathetic. These people, he said, “loved or hated” a particular thing.

The second key Palileo mentioned was to disconnect from traditional ideas, forms or laws. He said a simple way of doing this is by making a list of what everyone else does and moving away from them.

He introduced “Scamper” as a method for disconnecting from clichés and conventions. Scamper stands for substitute, combine, adapt, modify, put to another use, eliminate and rearrange or reverse.

A good example of an organization that applied this concept was the circus group Cirque du Soleil, Palileo said. The performers totally changed the way circuses worked by adding drama, theatrical elements, lights and sounds, and a good story to the entire production, while removing other spectacles such as animals and clowns.

When asked what exercises a journalist could do to come up with new ideas and avoid mental block, Palileo said one should simply “find a distraction,” which could be a nap, eating, walking or moving away from work temporarily.

Palileo’s approach to learning is the Whole Brain Learning System (WBLS), which takes into account the myriad ways that people think and learn. It is anchored on the scientific studies of education experts Roger Sperry, Paul McLean, Ned Hermann and Howard Gardner.

WBLS is one of the methods used by Bayan Educational Systems and Technologies (BEST), the BA arm that offers management training programs to various organizations. Apart from creativity and innovation, BEST also offers workshops on futuristic thinking, leadership, strategy, whole brain management and other management functions.