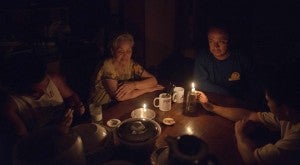 This picture taken on November 16, 2013 shows typhoon victims sitting around a table inside their partially damaged house at night in Tanauan on the outskirts of Tacloban. AFP FILE PHOTO

Petilla made this  promise  in a speech  after a flag raising  ceremony  held in front of  the  municipal hall of Palo town in Leyte, one of the areas severely hit by super typhoon “Yolanda,” said Radyo Inquirer 990AM  reporter  Chona Yu.

Petilla  was  former  governor  of Leyte  before he  was appointed by President Benigno Aquino  III to head the Department of Energy.

Yu said employees were  required to attend the flag raising  ceremony  because the  President, Interior Secretary  Mar Roxas and other local officials  were  in town to look after the  plight of the typhoon victims.

But she said the  municipal hall  itself was  also  destroyed  by the  typhoon so the employees had to make do  with the only room at the ground floor spared by the typhoon.

In the evening, a free movie will be shown in front of the  municipal hall to give temporary entertainment for the typhoon victims,  Yu further said still quoting Petilla.