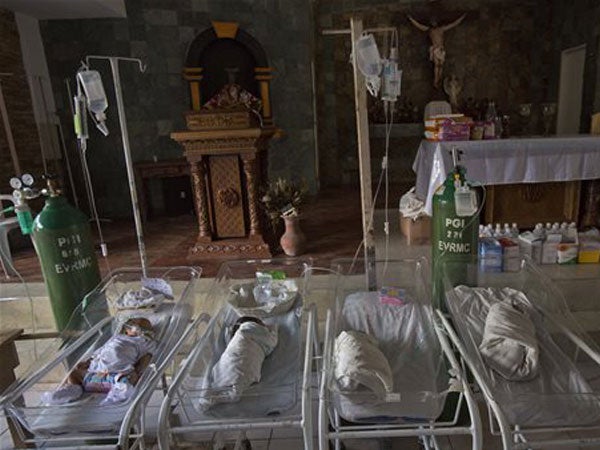 Sick and premature babies lie in cribs on the alter of a Catholic chapel inside the Eastern Visayas Regional Medical Center in Tacloban on Saturday Nov. 16, 2013. The chapel is now being used to care for infants after Typhoon Yolanda destroyed the original facility of the hospital. AP

TACLOBAN, Philippines — All through her very short life, the parents had squeezed oxygen into her tiny body with a hand-held pump to keep her alive.

In the end, their prayers and whatever little medical care doctors could muster in the Yolanda-ravaged hospital were not enough. Althea Mustacia, aged three days, died on Saturday.

She was born on Nov. 13, five days after Typhoon Yolanda (international name Haiyan) annihilated a vast swath of the Philippines, killing thousands. The storm’s aftermath is still claiming victims, and Althea was among the latest.

She was born at the government-run Eastern Visayas Regional Medical Center, suffering from a condition called newborn asphyxia, a failure to start regular breathing within a minute of birth. The consequences are possible brain damage or death if not corrected quickly.

Althea could have been saved had the hospital’s ventilators had been working. But power lines were down in the entire region. There was no electricity and none of the equipment in the hospital — flooded and wrecked — worked. Not the ventilators, not the incubators, not the suction pumps to feed her oxygen.

Instead, her parents had to push life into her mouth with a hand-held pump connected to an oxygen tank. They took turns to do this continuously since she came into this world without stopping. With her lungs barely functioning, the only sign of life in the infant was a heartbeat.

But Althea’s fragile body could not cope. Even the heartbeat stopped on Saturday evening, a few hours after an Associated Press team visited the hospital.

The attending physician, Dr. Leslie Rosario, told the AP that her parents wrapped her body in a small blanket and left in tears.

She said the storm had not been a factor in the baby’s problems, noting that insufficient prenatal care most likely complicated the pregnancy for the 18-year-old mother. The baby was not born premature.

Althea was one of the 24 babies at the hospital’s neo-natal ward, which had to be shifted from the ground floor to a chapel one story above because everything on the bottom floor had been ruined by the storm.

The chapel’s 28 pews are now occupied by some mothers, resting with IV drips in their arms.

Until Saturday, the makeshift ward in the chapel had no light except candles. One small fluorescent bulb attached to a diesel generator was hung Saturday in the middle of the room where a few packs of diapers sat on the altar below a picture of Jesus.

Read Next
2 PCG vessels scour seas off Leyte coastal villages in search for bodies
EDITORS' PICK
Over 3 Million worth of prizes to be won at Smart Padala’s SENDali Manalo Promo!
Gear up and get ready to play with Yamaha Mio Gear
Acer starts the year off strong with the Aspire Vero National Geographic Edition
If elected VP, Sara Duterte will push for mandatory military service for all Filipinos
Senate bill seeks to penalize employers requiring employees to work during rest hours
Marcos-era elections: Not what his son signed up for
MOST READ
‘Sampal sa gobyerno:’ Drilon wants unvaxxed PAO chief barred from working
Vice mayor slams Vico Sotto for turning Pasig into a ‘puro palabas’ city
Bongbong-Sara tandem names 7 candidates in initial senatorial slate
Jose Manalo’s son Benj pays tribute to late mother: ‘You’re a testimony of God’s love’
Don't miss out on the latest news and information.