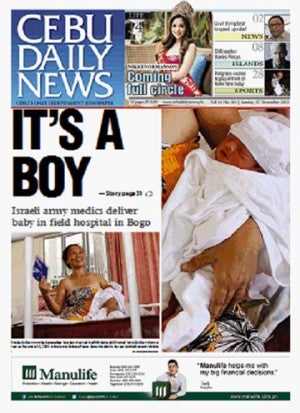 Israeli army medics have delivered a baby in the typhoon-struck city of Bogo, north Cebu, and the grateful mother named him “Israel”.

The birth took place last Friday in a field hospital set up by 150 members of the Israeli Defense Forces (IDF) Home Front Command a week after supertyphoon Yolanda inflicted heavy damage in Bogo’s s new City Hall and most buildings.

The mother, Emylou Antigua, 40, was rushed in from among a long line of patients seeking treatment.

The attending physician, Dr. Reuven Keidar, held baby Israel in his arms and offered the traditional Hebrew congratulations to the parents: “Mazel Tov (Lucky you). It’s a boy,” an Israeli Embassy statement said.

Baby Israel was born at 2 p.m. or about two hours after the field hospital was opened. It was a natural delivery.

He arrrived one month ahead of schedule, and weighed only 2.3 kilos, but doctors declared the baby “healthy.”

“If our baby came out healthy, I would name him Israel,” said Audrin, the child’s father.

So far, the baby glows a healthy pink and is very “enthusiastic” about breastfeeding, said the mother.

No incubator is needed but doctors advised the grateful parents to bring the baby to a doctor if there are any signs of difficulty breathing or turnin “blue.”

The couple was hoping for a girl, since they have two boys in their care, aged 6 and 8, but consider the infant a blessing.

“We’re so lucky to have him,” Emylou said in Cebuano.

Baby Israel was the first child born in the facility, earning him both local and international mention following a few hours after his birth.

Emylou, the barangay treasurer of San Vicente, in Bobo, said she was still busy distributing relief goods and didn’t tell her husband that she began to have contractions on Friday morning.

“Ayay! Manganak na gyud ko! (Oh no, I’m going to give birth!),” she recalled telling herself.

She rushed to the field hospital to get a referral for admission to a hospital in Cebu city. Instead Israeli medical staff assured a safe delivery in the their tent facility.

In the next town of Medellin, a 20-year-old woman gave birth at home alone.

She was rushed to a birthing center and then the field hospital by her partner, Jerry Pradilla, 23, who came home at 11 a.m. from collecting relief goods to find her with a newborn still attached by her umbilical cord.

“I tried to call out for help but nobody was around,” said Maria Lillibeth Jumao-as, who felt belly pains at 9 a.m.

The baby girl is their second child.

Since Friday, the Israeli hospital has served about 150 patients a day, attending to cases from the common cold to diagnosing cancer.

Israeli doctors are now working on restoring a 70-year-old man’s eyesight after his eye was struck by a nail during the typhoon,., the first ophthalmologic case for the Israeli team.

The man will be operated on by Israeli medical staff at the Vicente Sotto Memorial Medical Hospital in Cebu City.

They will stay for three weeks.

The medical group will leave behind medical supplies, medicines and some equipment to the Severo Verallo Memorial District Hospital in Bogo city when they leave.

Residents from nearby towns line up outside the compound waiting to avail of the free medical attention.

Herminia Perono, 57, came to have her blood pressure and diabetes checked.

“I am happy because I can ask for free medication here,” she said in Cebuano.

By 6 p.m. the facility is shut down to conserve energy since they are relying on gas-powered generators.

“We have ECGs, x-rays, ultrasounds and laboratories and these all need electricity,” said Dr. Hadar Maram.

However, she said that they will try their best to make those who come to the facility “better.”

Bogo City Mayor Celestino Martinez Jr. said they are trying to reach out to other towns in north Cebu.

“This hospital will not only cater to nearby towns, it will cater to the whole northern Cebu,” said Martinez.

Cebu Gov. Hilario Davide III, who visited the contingent yesterday, also had his turn, when he asked for medicine for his dry cough.

The Israeli team is one of 11 foreign medical groups that have set up operations in typhoon-hit regions.

“The field hospital capability of the Israelis is top class. We have seen it is very effective in many other crises as well,” said John Ging, a top UN humanitarian official in New York.

Israel’s response to the disaster in the Philippines follows similar relief operations the country mounted in Haiti in 2010 and Turkey in 2011. /with an AP report