‘Tabo’ (dipper) is a must for relief package 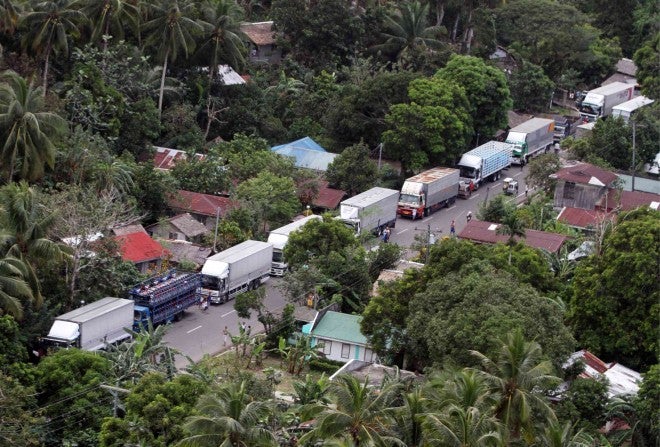 WHAT NOW? Food trucks wait in a long line of vehicles carrying relief to Samar and Leyte provinces. The convoy had been held up in the highway leading to the port in Matnog, Sorsogon, where there is a shortage of ferries sailing to Samar. NIÑO JESUS ORBETA

It would seem that even in the evacuation center, Filipinos cannot do without the “tabo.”

Found in the emergency sanitation kits for evacuation centers put together by the International Organization for Migration (IOM) is the dipper (tabo), an item that aid officials say is probably unique to the Philippines. It won’t be found, for example, in the refugee camps on the Thai-Burma border.

“The tabo is both cultural and practical. Since we don’t have running water or tap water in many areas, it has become necessary,” said Romina Sta. Clara, the national project development officer of the IOM Philippines.

The tabo, which is procured locally, is now included on  the list of standard nonfood items for emergencies formulated by the IOM, the 127-member intergovernmental organization promoting humane and orderly migration and also involved in humanitarian response around the world.

Evacuation centers must have sanitation kits for evacuees and these include bleach, pails, shovel, broom, scrubbing brush, gloves, jute sack, XXL plastic bag and the dipper or tabo, the agency says.

The IOM, which has been in the Philippines since 1974, co-leads the Camp Coordination and Camp Management cluster with the government and is a key partner of the shelter cluster, working directly with the Department of Social Welfare and Development (DSWD).

As more funds are raised for relief in the Philippines, the IOM has issued an appeal for some of the funds and donations to be in the form of nonfood items, which are badly needed in the evacuation centers.

The hygiene kit, on the other hand, includes diapers for babies and adults, sanitary pads, soap, towel, toothpaste and toothbrush.

“These kits are not limited to evacuation center distribution. They are given to all displaced and vulnerable populations even when they are not inside evacuation centers. For example, in Bohol province after the earthquake, there were more people outside the evacuation centers for fear of falling debris or trauma,” Sta. Clara said.

The IOM is stepping up its humanitarian work in the Philippines in the face of the devastation wrought by Supertyphoon “Yolanda” (international name: “Haiyan”) that tore into the Visayas on Nov. 8.

Yolanda is considered the most powerful typhoon to make landfall with a strength that was 10,000 times that of the deadly Typhoon “Pablo” (international name: “Bopha”), which hit Mindanao in December 2012.

International IOM experts had been flown in to the areas hit by Yolanda from Manila, Bangkok and Geneva to assist local staff members, who have been at ground zero in Tacloban City since last Sunday, establishing the IOM’s presence and setting up a structure to help deliver aid.

According to the IOM, sanitation was becoming more of a problem in the typhoon-hit areas as open defecation is widespread and this could lead to the outbreak of waterborne diseases.

“The sooner we can get people into safe and well-organized temporary shelters, the better,” said Conrado Navidad, the IOM operations coordinator.

“In a city as widely damaged as Tacloban, we have no real alternative in the short term if we want to provide people with minimum levels of comfort and dignity. People are staying optimistic but the longer this goes on the more disaffected they will become,” he said.

IOM director general William Lacy Swing is set to arrive in the Philippines today and will be visiting several sites in the affected provinces.

The scale of the crisis affecting the Philippines is vast, with some 2.45 million families, representing 11.3 million persons, directly affected by Yolanda, the IOM said in a statement.