Cardinal Tagle: Be the face of God, be one with the victims | Inquirer News
Close
menu
search

Cardinal Tagle: Be the face of God, be one with the victims 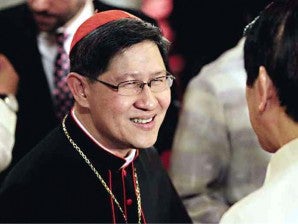 MANILA, Philippines—Cardinal Luis Antonio Tagle was teary-eyed on Saturday when he said “Be the face of God and be the hope of others.” It was a prayer service and Holy hour at the San Fernando de Dilao Parish Church in Paco, Manila.

Tagle said people are now “suffering, grieving, and confused,” and even questioning the plans of God because of the calamities that devastated our country.

He urged everyone to pray and hope.  The Cardinal also appealed to the people especially those who were spared from the supertyphoon “Yolanda” (international name: Haiyan) to be the face of God and be one with the victims in this trying times.

November 16 has been declared by the Catholic Bishops Conference of the Philippines (CBCP) as a “Day of lament and hope: Solidarity in prayer (Panaghoy at Pag-asa: Damayan sa panalangin).”

According to Tagle, a day of prayer is an expression of solidarity with fellow Filipinos who were severely battered by monster typhoon “Yolanda” and of the successive calamities that afflicted the country.

Outpouring of support for ‘Yolanda’ relief