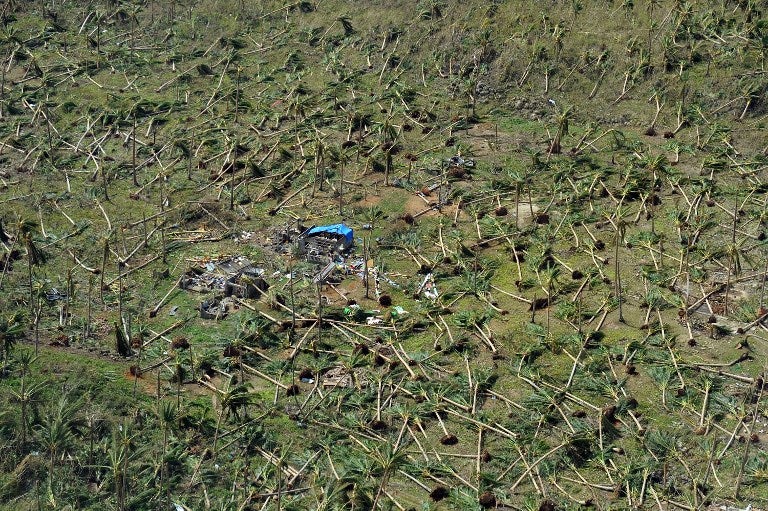 This aerial photo shows uprooted coconut trees on a hill near the town of Guiuan in Eastern Samar province in the central Philippines on November 11, 2013 only days after Super Typhoon Haiyan devastated the town on November 8. Philippines rescue workers struggled to bring aid to famished and destitute survivors on November 11 after the super typhoon that may have killed more than 10,000 people, in what is feared to be the country’s worst natural disaster. FILE PHOTO

GUIUAN, Eastern Samar, Philippines—With the reopening of its airport and the delivery of relief goods gaining momentum, this town where Supertyphoon Yolanda (Haiyan) made its first landfall last week has finally had its fill of assistance from the government and the international community.

On Saturday morning, Philippine military C-130 transports, aircraft from the US military and several private planes took turns landing on its airstrip to disgorge relief goods and pick up residents  waiting for plane rides out of the devastated resort town.

“Guiuan has become a hub for relief goods to be delivered in the neighboring towns. The aid has started pouring since Friday,” Guiuan Mayor Christopher Gonzales told the Inquirer on Saturday.

Gonzales pointed out that Guiuan, a second-class municipality known for its white beaches, had been isolated for four days without food or water. Reports reaching the town hall said groceries and pharmacies had been ransacked by looters within the first two days of the typhoon’s first landfall.

The looting prompted local officials to impose a curfew from 8 p.m. to 5 a.m. A 120-man additional force from the Philippine National Police arrived in Guiuan for security Tuesday morning, officials said.

Gonzales lamented that the people of Guiuan had struggled to look for food or water as help from the national government started to trickle in  only four days after the typhoon struck.

“But we understand them because Guiuan was not the only place devastated by the typhoon. No one is to blame. What is good is aid from outside now can be felt,” Gonzales said.

As Gonzales spoke around, 200 residents stood waiting outside the Guiuan airport for a plane ride to Manila.

“We are waiting here for five days now. Yes, we can see those relief goods coming, but it has never reached us,” Reggie Delos Santos, 39, told the Inquirer. he said he wanted to leave the battered town to seek help from relatives in Manila.

Members of the 25-man clearing team from the Metropolitan Manila Development Authority who had traveled for two days by land and sea were shocked to see the devastation upon arriving here 3 a.m. on Saturday.

“Zombieland” was how most of them desribed the  area, noting the toppled trees and roofs blown off houses. The ceiling of the old church had caved in. The surfing camp on Calipoan Island, around 10 km from the town proper, was gone.

Renee Patron, a Filipino-American living here, said: “The seawater went up all the way to the mountain. The beach doesn’t look the same. The sand became boulders. The corals became mountains.”

At the height of the typhoon, Patron said, she and her family hid inside a closet.

“We are just happy to be alive. All the things we have are gone and we realized those things don’t matter at all,” she said. “The hardest part is not knowing what has happened to the people we know. I don’t know if they’re still alive.”

She said Guiuan had been isolated from the rest of the world without communication lines.  Patron said supermarket owner Susan Tan lent her satellite phone to her neighbors so they could let loved ones know they were alive.

Mayor Gonzales said one major obstacle to the distribution of relief goods delivered to the airport  was the lack of fuel.

“‘We are running out of gas and diesel. What will we do with relief goods if we cannot distribute them to the households that need them?” Gonzales said.