Tacloban residents begin to rise from the shambles 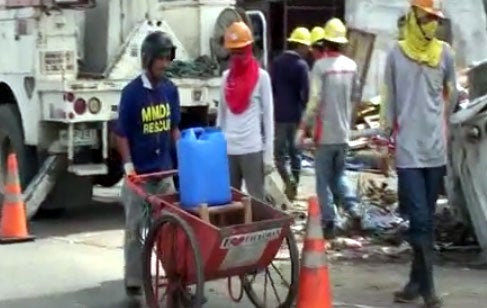 TACLOBAN CITY, Philippines—Slowly, the people here are trying to pick up the pieces of their shattered lives as the city, flattened only a week ago by the strongest typhoon this year, tried to muster the courage to move on.

While litter and debris dominate the landscape of this provincial capital, pockets of the ravaged city are beginning to come alive.

On Saturday morning—the usual flea market day in the countryside—a few ambulant vendors turned up at the break of dawn on Avenida Veteranos, selling what little they had salvaged from the rubble: vegetables, rootcrops, bananas and oranges, condiments, noodles, used as well as new but water-damaged clothes, and toothpaste.

The smell of rotten food wafted from the piles of garbage nearby as people quietly huddled around the precious commodities on sale.

But cash-strapped survivors were far from being ripped off by their fellow typhoon victims.

Remy Yare, 34, was selling rice and egg noodles for P50 a pack, which in better times would fetch P90, and a pack of another type of noodles for P50 instead of the usual P60.

Yare said she decided to bring out her goods  lest they rot in her store, which had been heavily damaged by Supertyphoon “Yolanda” (Haiyan).

Celia Orique, who is in her 60s, placed squash and onions on a piece of plywood she had picked up along the way.

She said she had stocked up on Davao-grown vegetables before Yolanda came.

Orique lost her house but not everything.

“I only saved this shirt and shorts, but my husband and children are all safe,” said Orique, thanking the heavens for sparing her family.

The Filipinos’ resilience was evident in places across the city.

On Tacloban’s main streets and in many side roads, children were fetching water from busted water pipes, while their elders cleaned up yards strewn with every imaginable litter.

But much of debris still had to be removed as only main roads had been cleared of by work crews.

An aid worker for some 20 years, Malaysian Datuk Abdul Mutalif Abdul Rahim  said that Yolanda was “the greatest human tragedy” he had ever seen.

When the Inquirer team went around the city the other night—exactly a week after Yolanda ripped through this city, bringing high wind and whipping a surge of ocean water—the city that was once the commercial hub of Leyte and the whole of Eastern Visayas resembled a ghost town.

Toppled power lines and posts were everywhere and the city was in near total darkness but for a few public buildings serving as relief and rescue command centers such as the Leyte Sports Complex, City Hall and a few hospitals which were lit up by power generators.

Many still had to find and or bury their loved ones.

The Inquirer spotted Saturday one body still left lying by a roadside, and Interior Secretary Mar Roxas, alerted by Social Welfare Secretary Dinky Soliman during a 7 a.m. briefing, had it removed and transferred to one of the mass graves dug on the outskirts of town.

Survivors trying to leave the city said they were not just escaping the stench of death or hunger or desperation, but they just wanted to forget.

Imelda Pasagui, 45, recounted the horror of a five-meter storm surge that engulfed much of the coastal city on November 8.

But she and her family had heeded the warning for preemptive evacuation, abandoning their house two days before Yolanda struck. They survived.

When she and her family returned to their neighborhood near the Sto. Niño Church last Wednesday, she said bodies were still trapped under the rubble—in collapsed houses, under ships that had been washed inland and on many still inaccessible alleys and streets.

Pasagui was with her children, husband and a group of some 20 other family members, neighbors and relatives who had set up camped at the Tacloban port, waiting to be ferried by the Philippine Navy’s BRP Bacolod to Cebu.

She said she had relatives in Cebu City, but planned to go to Quezon City, or any place as far away as possible. “Anywhere but here,” she said.

“Our houses were swept away,” she said, fighting back the tears, “Nothing was left except the broken floors. There’s nothing here for us, nothing.”