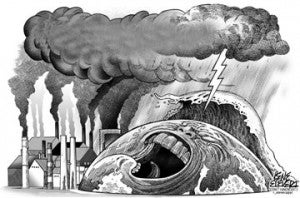 Yeb Sano, the Philippine representative to the United Nations (UN) climate change summit in Poland, was understandably tearful when he implored First World nations to do more in stopping the deterioration of the earth’s atmosphere due to pollution.

He struggled to find words about the devastation but his personal account about relatives including his brother who hadn’t eaten for days in Leyte, drove home his message.

He’s still on a food fast, an act of solidarity, until meaningful pledges are made to stop the emission of pollutants.

Back home, while many nations deliver assistance to typhoon victims, the Aquino administration is kept busy defending itself against criticism about slow relief work as its resources stretch thin in reaching victims across a vast part of Eastern Visayas.

The heat notched up after ABS-CBN’s Korina Sanchez took a dig at CNN anchor Anderson Cooper, with an undeserved comment that he didn’t know the real situation.

Yesterday Cooper brought her back to reality by pointing out that he was the one spending several days in Tacloban. So he invited Sanchez to visit Tacloban City and see for herself.

He also denied saying there was an absence of government presence in Tacloban, mentioning his live interview of a Navy captain, he said, was doing “heroic” work helping with survivors and visiting far-flung communities.

His best evidence, actually, was the video of his on-camera statements about the grim situation in the city and the words he used to describe the lack of organized relief operations five days after the storm struck on Nov. 8.

He recalled one clinic near the Tacloban airport that was swamped with people seeking treatment but finding no medicine or supplies. This underscored his point that relief aid was sorely lacking.

Cooper responded to President Benigno Aquino’s III admonition to the media to be “accurate” and to look for uplifting stories that show the resilience of the Filipinos in the face of disaster.

Again, Cooper had his evidence all on tape.

The reportage is accurate, he said, and each story showed the “strength” of Filipinos enduring hardships from the lashes of “Yolanda,” including those who refused to leave their dead unattended and at the mercy of the elements. “And we honor them with every broadcast that we do,” he said.

The international spotlight on the Philippines led by CNN’s prime time coverage of the calamty is a reality check to identify more clearly the obstacles that keep relief aid from penetrating storm-struck areas.

To dismiss it as chaff is to deprive us of necessary feedback.

We say “thank you” instead for jolting the Aquino administration to recalibrate efforts and push on with clearer leadership. On Day 7 of relief efforts, we should have a better sense of who’s in charge in echelons below the President.