Some victims prefer bullets to food to protect families 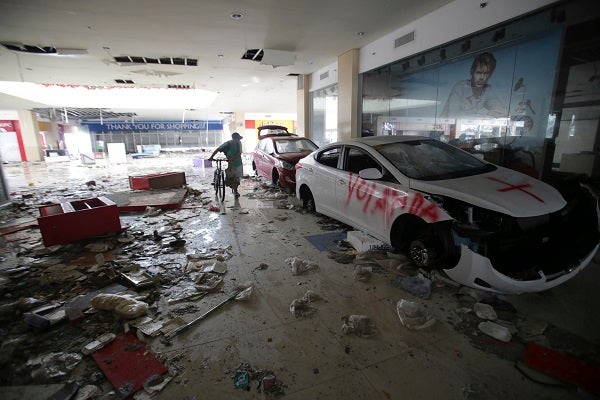 A Filipino man walks inside a mall that has been flooded and allegedly looted after Supertyphoon “Yolanda” (“Haiyan”) hit Tacloban city, Leyte province, central Philippines on Wednesday, Nov. 13, 2013. Some victims of Yolanda are asking for bullets instead of food or water from authorities to protect themselves from a newly organized armed gang. AP PHOTO/AARON FAVILA

TACLOBAN CITY, Philippines—Some victims of Supertyphoon “Yolanda” are asking for bullets instead of food or water from authorities to protect themselves from a newly organized armed gang.

One Marine major said he was surprised that while going around Tacloban, a resident came up to him to ask for .45-cal. bullets for his gun, indicating a feeling of insecurity gripping the city.

“The man told me that he needed the bullets because criminals were already roaming the city. He said he only wanted to protect his family and his home,” the officer told the Inquirer, but asked that he would not be named.

“Even if they don’t have food, what’s important to them is their safety. The situation in the city is aggravated if the people don’t feel secure,” he said.

“Abucay was not hard hit so it was the target of mobs looking for food and criminals who are taking advantage of the situation,” said Darlene Regis, an Abucay resident whose family rushed to the airport to leave the city. “They felt it was unfair that we had food and they had none.”

Regis’ mother, Aileen, a nonuniformed personnel of the Philippine National Police assigned to the intelligence unit in Tacloban City, said authorities had arrested two men who admitted they were part of a newly formed criminal gang.

Aileen said the group numbered 250, including typhoon victims, members of the Waray Waray Gang and prisoners who escaped from the city jail.

Senior Supt. Asher Dolina, executive officer of the PNP Directorate for Operations, said the incident in Abucay was blown out of proportion. Dolina told the Inquirer that the firing heard were warning shots by residents to ward off looters.

“The organized criminal gang is just a rumor,” he said.

Dolina also said there were already 600 policemen in Tacloban.