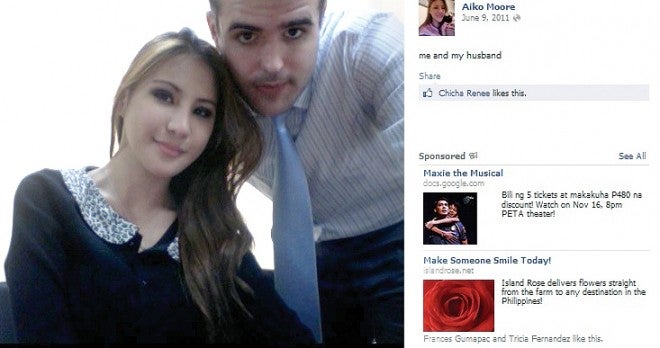 PHOTO of Aiko Baniqued Moore and her husband, James Edward Moore II, which she posted on her Facebook account in June 2011

An American businessman has been arrested after he beat up his Filipino wife who later passed away at a hospital in Makati City.

Aiko Baniqued Moore, 28, a car show model who was once featured on FHM, a men’s magazine, died on Wednesday night due to head injuries inflicted by her husband, 32-year-old James Edward Moore II.

A friend of the victim who witnessed the incident told police investigators that at 4:30 p.m., the couple had a violent argument inside their condominium unit on Amorsolo Street in Barangay Poblacion.

Case investigator SPO1 Rico Caramat said that the fight was caused by jealousy over “a paramour” although he did not go into details. Moore and her husband were married in 2011.

As the couple continued to argue, Moore’s friend said she took the victim’s children from a previous marriage into the condominium lobby and asked for help from security guards, Caramat told the Inquirer.

“When [the guards] arrived, they caught the victim’s husband beating her up in the head and body, and even slamming her head against the floor,” he added.

The guards intervened and Moore was rushed to Makati Medical Center where she was declared dead at 6:09 p.m.

Her husband, on the other hand, stayed in their bedroom until Makati policemen took him into custody. He had wounds on his head but the police said they were still verifying whether these were self-inflicted.

He will be facing parricide complaints to be filed by either Moore’s family or the Makati police, Caramat told the Inquirer.

As of Thursday, however, Aiko’s family has yet to file a complaint, but Caramat said the police may file charges on their behalf this Friday morning.