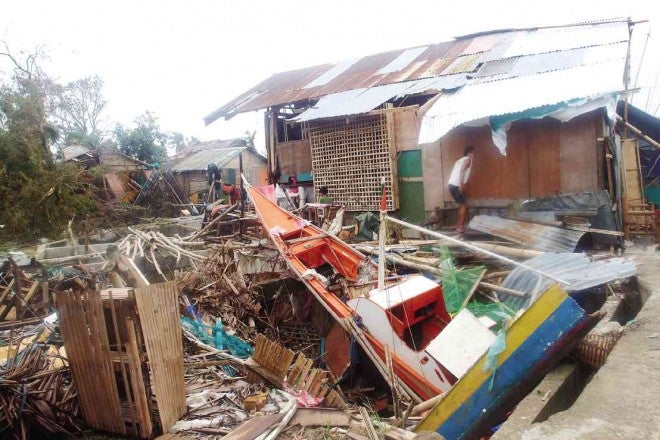 A boat shattered by strong winds whipped up by Supertyphoon “Yolanda” lies among the ruins of a house in a fishing village in Concepcion in Iloilo province. PHOTO COURTESY OF DR. RAUL BANIAS

CONCEPCION, Iloilo—“I’ve been a fisherman all my life but all I can do now is look sadly at the sea,” said 41-year-old Raul Hipolito.

Hipolito was among the 10 residents of the island-village of Malangabang who took a 30-minute ride to the mainland onboard small, battered boats on Tuesday to seek help.

With relief assistance coming in trickles and no money to buy food, the villagers had been eating bananas and shells because they could not fish.

But more than anything else, the fishermen are asking the government to help them get new boats so they can start earning a living.

“We need help to have new boats first. We can still live in shanties or tents but we cannot survive without boats and gear,” said Sonny Ciriaco, 47, village councilor of Malangabang.

He said they need to fish again so they can earn. Fishermen earn P200 to P500 per day if they can fish.

“How can we live if we cannot fish?” said Hipolito.

The island-village of Malangabang, which has a population of 4,200, is one of the areas worst hit by Supertyphoon “Yolanda” in Concepcion, a coastal town about 109 km northeast of Iloilo City where fishing is the main source of livelihood.

Eleven of the town’s 25 villages are island-barangays (villages) where 55 percent of the town’s population of 49,000 live, according to Mayor Millard Villanueva.

But the residents of Malangabang cannot forget the horror when 20-foot-high waves repeatedly lashed at houses along the shoreline leveling these off and washing away everything on their path last Friday.

“As islanders, we know the sea by heart and we don’t easily flee from huge waves. But that time all we could think of was to run,” said Hipolito.

He said families ran for more than a kilometer from their houses to a hilly area on the island when they saw the approaching waves.

Parents carried small children in their arms and even women who had just given birth ran while covering their heads as debris and roofs flew like projectiles in the air.

Many stumbled or fell and rolled over the ground but picked themselves up and continued running.

“We were more afraid of the waves than the flying roofs,” said Hipolito.

He said the fishermen felt pain from the wounds on their feet the next day. The injuries probably were from nails and debris that the people stepped on in panic.

Hipolito said he was able to carry only a pot with cooked rice when his family fled from their house last Friday. All their other belongings are gone.

“Zero balance. We have nothing else,” he said. “We cannot fish anymore because all our boats and fishing gear are gone.”

Ciriaco said only 30 of at least 500 motorboats were left and remain usable. These were the ones that were stuck in debris and were not washed out or destroyed.

Of 400 houses, only 30 remain standing and most of the villagers are living in shanties and in the wreck of their former houses.

With no communication and access to the mainland, villagers were only able to receive the first relief assistance transported by a helicopter on Sunday.

Those dropped off by the helicopter were enough only for a few residents. The airlifting of relief goods to island-barangays have also been hampered by bad weather.

Desperate, the 10 residents decided to cross to the mainland to seek assistance on Tuesday.

They plan to return to the island immediately to attend to their families there, hopeful that help would finally come.

Read Next
Even those with nothing offer help
EDITORS' PICK
MVP Group mounts unprecedented vaccination drive for 60,000-strong workforce
FILREIT leading growth in sustainable office spaces
Petecio, Obiena get chances to shoot for gold in their events
ECQ will authorities time to prepare for a surge – DOH
EDITORIAL: Raise the age of consent
Nintendo Switch new model – Nintendo Switch OLED is coming!
MOST READ
Tony Hawk had to clarify that Margielyn Didal was just joking
Aljur after separating from Kylie: For everyone’s sake, including my kids, I’ll always choose to be happy
ECQ again? Community pantry leader speaks out
ECQ will give authorities time to prepare for a surge – DOH
Don't miss out on the latest news and information.