Even those with nothing offer help | Inquirer News
Close
menu
search

Even those with nothing offer help 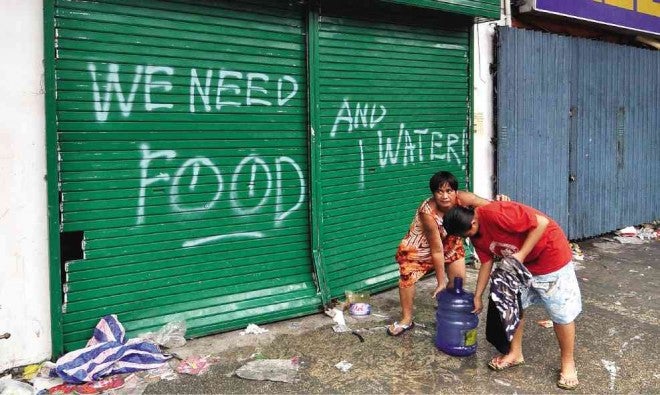 Call for help in downtown Tacloban City amid a desperate search for the most basic of necessities by people who survived Supertyphoon “Yolanda.” RICHARD A. REYES

A woman went to a radio station in Naga City to donate P300, profusely apologizing because she could not give more.

Another woman in Quezon province offered the piggy bank of her 10-year-old daughter filled with her daughter’s coin savings. The child, said the woman, wanted the piggy bank donated to victims of Supertyphoon “Yolanda.”

News about the tragedy that struck several provinces in the Visayas generated an outpouring of grief and donations.

Government officials, private groups and residents in Luzon have dug deep into their pockets to pool resources to help towns and cities devastated by Yolanda recover and provide survivors food, water, clothing and medical attention.

In Naga City, even the poor went to a local radio station to offer sardines, rice and cash to help.

Lawyer Angel Ojastro, a civilian volunteer, said an elderly woman, who did not give her name, dropped by local radio station dwNX, where the donations were centralized, to offer P300 even as she profusely apologized for the small amount she could afford.

“She cried in front of our television set when she saw children crying, all wet and hungry with nothing to eat and drink,” Adormeo said.

On Tuesday, the Department of Social Welfare and Development (DSWD) in Bicol shipped out 8,000 emergency family food packs worth P2 million for typhoon victims in Eastern Samar.

Arnel Garcia, DSWD Bicol director, said the initial shipment of the relief goods on board three trucks was intended for the towns of Guiuan and Taft, both in Eastern Samar.

He said the team’s trucks and payloader, which were equipped with its own supply of diesel, would help in clearing operations in Tacloban City.

The Department of Health in Bicol sent a 26-member medical team to Tacloban City, said its spokesman Jaime Guerrero.

Guerrero said the team would put up a 100-square-foot tent hospital and another smaller tent to accommodate more people needing medical attention.

In Isabela province, the provincial government sent a 90-member medical team to Tacloban City to help typhoon victims there.

The Isabela provincial board also passed two resolutions calling for donations from Isabela residents and for the allotment of financial assistance to areas hit by the typhoon in the Visayas.

In Pampanga province, more than 700 employees of the Clark Development Corp. (CDC) canceled their Christmas party so they can use the P1 million allotted for the event for typhoon victims. On their behalf, CDC president Arthur Tugade handed a check for that amount to the DSWD central office on Tuesday.

Twelve CDC directors also gave P100,000 from out of their per diem allowances.

In Baguio City, the country’s vice mayors had committed to convince their town and city councils to appropriate portions of their local governments’ calamity funds to help in the relief and rehabilitation of typhoon-stricken towns and provinces in the Visayas.

Members of a Christian group in Baguio City also initiated a relief collection drive for the typhoon survivors. The Christ Commission Fellowship-Baguio (CCF-Baguio), a Christian group, began the drive, encouraging members and friends to donate food, medicines, blankets and cash.

The University of the Philippines Baguio started a drive to collect money, food, clothes and medicines help typhoon victims, especially the more than 1,000 students, teachers and workers of UP campuses in Tacloban City and Palo, Leyte.

In Ilocos Norte, Gov. Imee Marcos has started a fund drive to help typhoon victims in Leyte, the hometown of her mother, Rep. Imelda Marcos.

In Pangasinan province, help for typhoon-ravaged Leyte and other provinces in the Visayas continued to pour in as more companies, groups and individuals chipped in cash, clothes and food in fund drives.