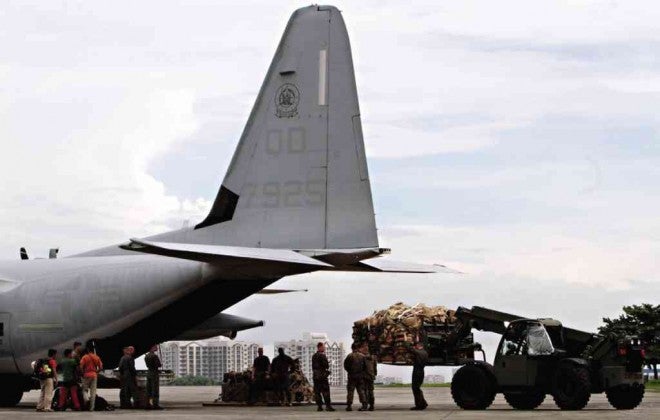 AID AIRLIFT US Marines load a cargo of relief goods for “Yolanda” victims on a C-130 plane at Villamor Air Base in Pasay City Wednesday. GRIG C. MONTEGRANDE

What started out as a call for solidarity among fellow Visayans has resulted in a massive show of support and the setting up of a relief operations center for Supertyphoon “Yolanda” victims at the Philippine Army gymnasium in Fort Bonifacio, Taguig City.

Noel, who came out on television to appeal for help for Yolanda victims from other Visayans on Sunday, recalled his feeling of helplessness after hearing of the devastation in his home region: “All the places in our memories are now gone. I thought to myself, ‘What can we do?’”

“This is our way of telling [fellow Visayans]: ‘We will not leave you,’” Noel said, adding that the first ones who trooped to the center with donations were his fellow Visayans, his friends and their families or alumni of Visayan schools.

The gym, home to six badminton courts and a basketball court, has also been receiving a continuous stream of donations, including 3,000 sacks of rice, causing a shortage of plastic bags on Monday evening.

On Tuesday, the center was able to ship out its first batch of donations to Ormoc, Leyte. Noel said interested donors or volunteers can contact 0999-9940772 or [email protected], adding that the center would be open from 10 a.m. to 10 p.m. until “donations continue to come in.”

Meanwhile, Metro Manila policemen have started taking up a collection among themselves for victims of the supertyphoon.

“It will be voluntary, without specifics on what to give. Whatever they can donate, in kind or in cash,” NCRPO-PCR head Senior Supt. Edgardo Wycoco said in a phone interview.

NCRPO spokesperson Chief Insp. Robert  Domingo said the monetary contribution  would be in addition to the 168 Metro Manila police sent to the Visayas as well as those assigned to secure or help out in relief operation centers in the metropolis.

One of Metro Manila’s richest cities, on the other hand, approved on Tuesday P50 million worth of aid to local governments reeling from the effects of Yolanda.

In a statement, Mayor Jejomar Erwin S. Binay said the amount would come from the city’s Quick Response Fund.

The Makati Social Welfare Department is also accepting donations. Those interested should call 8701722.