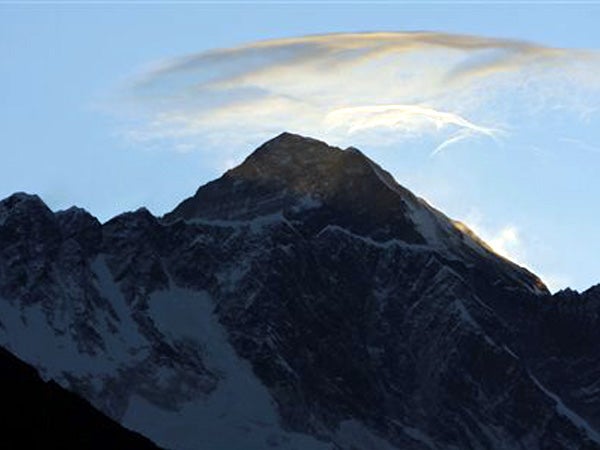 KATHMANDU, Nepal- An abandoned puppy rescued from a rubbish dump in India has trekked to Everest Base Camp, becoming what is believed to be the first dog to tackle the peak, his owner said Wednesday.

Former professional golfer Joanne Lefson told AFP she adopted the 11-month-old dog, called Rupee, in the mountainous Indian town of Leh last September and decided to take him on a trip to base camp at 5,364 meters.

The pair began Expedition Mutt Everest 2013 in the Himalayan town of Lukla on October 14, intending to raise awareness about the plight of homeless dogs and promote pet adoption.

They accomplished their record-making feat 13 days later, describing it as “one giant leap for dog-kind” on Facebook.

“I am so proud of Rupee. I thought I might have to carry him on some days, but instead, he took the lead and pulled me along,” Lefson said.

When she first saw the puppy, she said, he was dehydrated and close to death.

“He was really skinny; he looked like he had had no food or water for days. I just couldn’t leave him there to die,” she said.

Lefson nursed Rupee back to health and he doubled in size following a month on a high-protein diet. After checking with a vet, the pair embarked on their successful expedition.

The duo trekked across rickety bridges and wet mountain paths, dodging landslides along the way.

Despite missing part of his right ear and being close to death only a few weeks ago, Rupee had no trouble adjusting to the altitude and relished his first taste of snow.

“He loved the snow, he ate it, he played in it, if I had let him, he would have slept in it too,” Lefson said.

Photographs on the Facebook site show him enjoying the sights and sounds of Nepal, cuddling with bearded Hindu monks in Kathmandu and playing with children in the Himalayan town of Namche Bazaar.

“I hope his accomplishment will compel people to be kinder to animals, especially strays. We need to realize that every life matters,” Lefson said.

The pair is now in Lefson’s native South Africa, where Rupee is catching up on his sleep.

Lefson is preparing to launch a book next week devoted to her former dog Oscar who accompanied her around the world.