Army advances as jihadists call to arms in north Syria 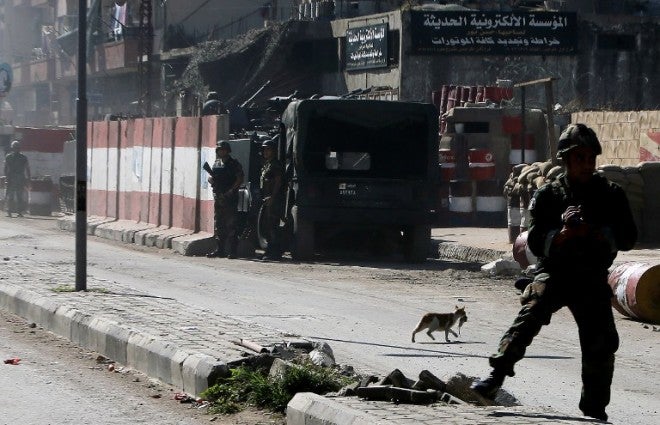 A cat crosses the street with a mouse in his mouth as Lebanese army soldiers stand guard in Syria street in the northern Lebanese city of Tripoli. AFP

BEIRUT, Lebanon- The Syrian army advanced Wednesday on the Islamist-held northern village of Tal Hassel, a monitor said, as jihadist rebels in nearby Aleppo called for mass mobilization to counter the offensive.

Jihadist fighters in Aleppo have called for mass mobilization to counter regime advances after the Islamists suffered a string of setbacks around the northern city.

In a statement posted online, the Al-Qaeda-affiliated Islamic State of Iraq and the Levant (ISIL) called on “all brigades and Muslims to arms to face off against the enemy which is attacking Islamic territory.”

“Those with a valid excuse not to fight must supply weapons and money,” added the statement, which acknowledged “many losses in fighting for Base 80, Khanasser and Sfeira.”

It said President Bashar al-Assad’s forces, which it dubbed “the Alawite army,” had taken “part of the road linking Khanasser, Tal-Aran and Sfeira because of the weakness of rebel groups.”

The statement put this down to “many rebel units withdrawing from the combat zone.”

Six Islamist rebel groups, among them Al-Nusra Front, Ahrar al-Sham and Liwa al-Tawhid, had on Monday issued a general call to arms in Aleppo “to face up to regime attacks.”

A military source said on Monday the army had secured most of the area around Aleppo International Airport and could reopen the facility which fighting has kept closed for nearly a year.

This came after regime forces retook Base 80, a strategic facility charged with securing the airport just outside the country’s second city.

Aleppo airport was closed at the start of the year amid security concerns as rebels launched a campaign to seize airfields in the area.

Advances by the army follow the fall of Sfeira southeast of Aleppo. It was recaptured by regime troops at the beginning of November, after months in rebel hands.

Both state media and the Observatory said on Monday the army had also secured Tal Aran town, one of the last areas under rebel control on the Sfeira-Aleppo road.

Amid the ongoing clashes, ISIL released a video of two jihadists in Aleppo holding up the head of a man they said was an Iraqi Shiite who had been fighting on the side of the regime.

The Observatory said the decapitated man was a rebel.