Mad rush out of Tacloban

Lack of supplies forces Supertyphoon “Yolanda” victims in Tacloban in the central Philippines to force their way onto military planes to get out of the devastated city.   ASSOCIATED PRESS  VIDEO

TACLOBAN CITY—Thousands of typhoon survivors swarmed the airport here on Tuesday, seeking a flight out, but only a few hundred made it, leaving behind a shattered city short of food and water and littered with bodies.

As two Philippine Air Force C-130s arrived just after dawn at the destroyed Daniel Romualdez Airport, more than 3,000 people surged to the tarmac past a broken iron fence to try and get on the aircraft, but soldiers and policemen held them back.

Mothers raised their babies high above their heads in the rain in hopes of getting aboard. One woman in her 30s lay on a stretcher, shaking uncontrollably.

Only a few managed to board.

“I was pleading with the soldiers. I was kneeling and begging because I have diabetes,” said Helen Cordial, whose house was destroyed during the typhoon. “Do they want me to die in this airport? They have hearts of stone.”

A second stampede occurred Tuesday afternoon when people rushed to a US Air Force C-130 to try and get out of the city. But they were driven back by the police.

‘Back to primitive age’

“This is a wake-up call for us,” Supt. Rafel Doron, chief of the Bureau of Fire Protection Service in Southern Leyte, said after seeing the destruction caused by Supertyphoon “Yolanda” around the city of 220,000 people.

Doron said his team’s efforts to help city residents were not enough, given the magnitude of the destruction that befell Tacloban and other badly hit places in Eastern Samar.

Money seemed to have no value in the city—people would rather have food, water, electricity and means of communication.

“The city has been thrown back to the primitive age,” Doron said.

Sleeping in the rain

Most of the residents had spent the night under pouring rain wherever they could—in the ruins of destroyed houses and along roadsides and fallen trees.

Some slept in tents brought by relief groups.

Most of the city is in ruins, a tangled mess of destroyed houses, cars and trees. Malls, garages and shops have all been stripped of food and water by hungry residents.

Doron and his crew navigated the roads littered with debris to get to the city convention center to deliver potable water, a luxury to residents.

Bodies lay on the side of a road—a sight that shocked first responders, like Doron.

Doron’s team has been working nonstop, cleaning up roads and delivering water since Sunday. They arrived on Saturday night from Maasin town.

Some residents waited near the airport during Tuesday’s intermittent rains. Most were impatient, at times getting unruly at the gates.

Tired Air Force pilots told people scrambling to get on a flight out of the city to try a Navy ship that could accommodate up to 2,000 people and bring them to Cebu province.

But his appeal apparently went unheeded.

Other problems bedeviled the authorities.

On Tuesday, soldiers clashed with about 15 suspected communist rebels who had attacked an aid convoy en route to Tacloban and killed two of them, the military said.

“There were no casualties on the government side,” Lt. Col. Joselito Kakilala said, adding one of the attackers was wounded.

The encounter occurred in Sorsogon’s Matnog town, 240 kilometers from Tacloban. Some of the relief goods were taken by the attackers.

Tacloban Mayor Alfred Romualdez said the exodus of some residents could be attributed to the decision of heads of families to move their loved ones to safety so they could focus on rebuilding their lives.

“It’s normal for every father to want his family out,” Romualdez said. “You have to take care of your loved ones first. You can’t work because you’re thinking of their safety.”

Nearly five days after Yolanda struck, residents had begun cleaning up roads and collecting bodies lying in the streets.

The stench of death was overpowering.

On a road leading to the airport, more than 20 bodies of men, women, and children—already black and bloated—were lying around.

Most were covered with galvanized sheets while others were wrapped in blankets.

‘We will die here’

It was the same scene downtown.

A huge signboard on a road with a handwritten appeal in Filipino read: “Please pick up the dead. We are going to die here. There are 40 bodies in St. Peter’s (funeral parlor).”

Construction worker Joey Talisay, 27, said his wife and three children, the youngest of whom was 9 months old, drowned in the storm surge. Their bodies were still at the elementary school some 2 kilometers away from the airport.

Talisay’s two other children survived while another two were missing.

He and his friends were staying at a place near the elementary school, which had served as evacuation center before the typhoon struck.

Romualdez said people were still coming out of “shock from the supertyphoon” and “should be given some slack” when they complained of lack of food and water.

“Of course, they are thinking of what they would eat, not only today, but also for the rest of the week,” he said.

Romualdez said the local government was working to collect the bodies. He said more than 1,000 body bags had arrived from the health department in Manila.

About 70 bodies recovered on Tuesday were sent to the Philippine National Police office  for identification. If they remain unclaimed, they will be buried in mass graves. 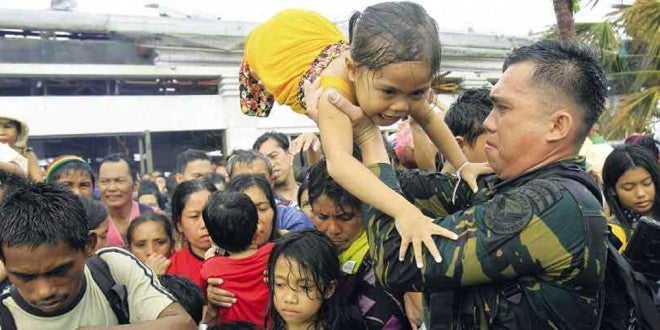 LEAVING LEYTE. A soldier holds a little girl who has been cleared to board one of the evacuation flights out of Tacloban City on Tuesday. AP

Romualdez said more cadavers lay in the debris of collapsed structures. “We just follow the stench to get to where they are,” he said.

The mayor said order was returning little by little to the city, with more than 100 troops now deployed.

Still, some had taken advantage of the calamity and ransacked stores and houses.

A curfew from 8 p.m. to 5 a.m. has been imposed in the city. Romualdez said the city was “slowly getting back to having peace and order.”

He also stressed the urgency for telecommunications companies to restore operations to allow for the flow of information, which the people needed after being isolated for nearly a week now.

The mayor urged gas stations and stores to start cleaning up and reopen.

“The worst is over,” Romualdez said. “We were knocked down like Manny Pacquiao, but we will build our city again. We will survive.”—With reports from AP and AFP