Mayor Arsenio ‘Arsenic’ Lacson gets his arms back 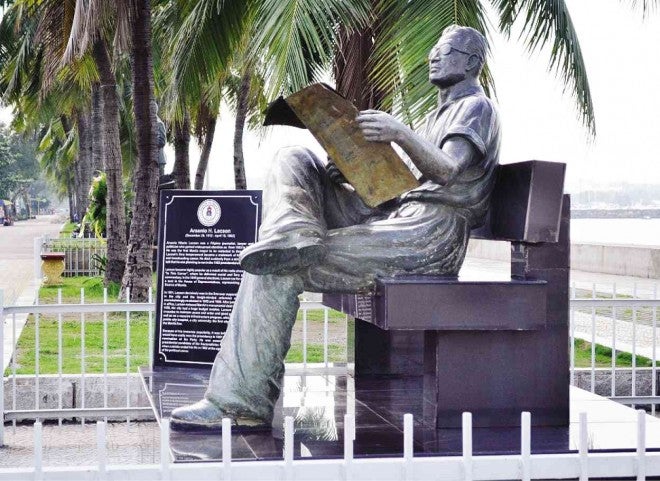 The Julie Lluch masterpiece has regained its limbs and place of honor on Roxas Boulevard, seven months after the Inquirer drew attention to its negligence, which since 2011 had failed to draw any action from the previous Manila city administration. MANILA CITY DEVELOPMENT INFORMATION OFFICE

A long-neglected artwork celebrating Manila’s past has recently been restored, but another may be facing the wrecking ball.

The city government earned praise for having the “sense of propriety and history” to restore the bronze sculpture of the late Mayor Arsenio Lacson on Roxas Boulevard, but may be asked to save Capitol Theater, an art deco building on Escolta cherished by heritage conservationists.

The Lacson statue finally regained its arms—as well as the newspaper that the seated figure was holding—and was also brought back to its original spot on the promenade facing Plaza Rajah Sulayman, former President and now Manila Mayor Joseph Estrada said Tuesday.

“Manila is not Manila without any mention of Mayor Lacson. He transformed the capital city into a show window of development to the world and it is but fitting to treat the memorial of a hero with respect,” said Estrada, who ordered the restoration shortly after taking over City Hall in June.

The Inquirer reported on the dismal state of the statue in April, during the term of then Mayor Alfredo Lim, who lost his reelection bid to Estrada a month later.

Elected mayor of Manila in 1951, Lacson was considered by many to be the best mayor the city ever had. The man, who earned the moniker “Arsenic” for also being a hard-hitting radio commentator, died of a heart attack while in office in 1962 at the age of 49.

The Manila Zoo and the country’s first pedestrian underpass, still in use today in Quiapo, were built during his term. He also laid down the concepts for the Ospital ng Maynila and Pamantasan ng Lungsod ng Maynila.

Lacson’s tomb at Manila North Cemetery has also been spruced up and another statue would be put up at Freedom Triangle in front of City Hall, the Inquirer learned.

In a statement, Lacson’s family members thanked Estrada “not only for rising above partisan politics but also for his sense of propriety and history by giving proper recognition and respect for a good man who served Manila so very well.” 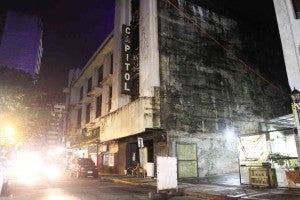 THE ONCE classy Capitol Theater on Escolta, now just a shadow of its old prewar glory, may soon have its ‘‘last full show’’ at the hands of a demolition crew, according to heritage conservationists. JOAN BONDOC

The sculpture, which captured Lacson in his trademark aviator sunglasses and reading a broadsheet on a park bench, was completed by Julie Lluch in 2003, after being commissioned by then Mayor Lito Atienza.

It was moved to a less prominent spot after being knocked down by a typhoon in 2011. Its arms and the broadsheet they were holding were also cut off and never retrieved. Lacson’s children then sent letters to Lim asking City Hall to restore the image.

But as one piece of public art in Manila was saved, the city might soon lose a building which the Heritage Conservation Society considers highly significant.

The HCS feared that Capitol Theater, built in the 1930s and designed by national artist Juan Nakpil, would soon be demolished after the group received information that a residential condominium was being planned in its place.

“The building serves to demonstrate how Escolta served as the canvas of the artistic and professional evolution of some of the country’s greatest architects,” the HCS posted on its Facebook page.

The structure should be protected by the National Commission on Culture and the Arts because it was made by a national artist, the group said.

“This is not to say that no development can happen here,” the HCS said. “What we mean to underscore is simply one of the key tenets of the Heritage Law: Any intervention with a structure of this cultural value must be performed with sensitivity and care, and with the review and approval of the relevant cultural agency.”

According to HCS, Capitol Theater also features works by Italian sculptor Francesco Riccardo Monti, whose 9.5-meter bas relief on the facade of the old Meralco building on San Marcelino Street in Ermita recently became the focus of the group’s rescue efforts.

Reached for comment, city building official Juan Capuchino said his office had neither issued a permit nor received an application for the demolition of Capitol Theater, based on records since January.