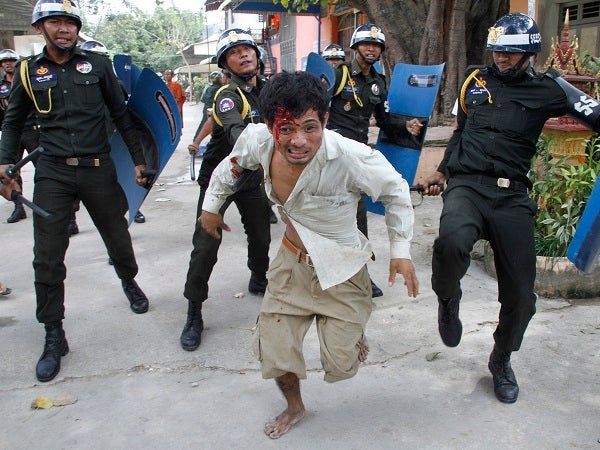 An injured Cambodian worker escapes from riot police in the compound of a Buddhist pagoda in Phnom Penh, Cambodia, Tuesday, Nov. 12, 2013. AP

Hundreds of workers from the SL Garment Processing (Cambodia) Ltd. Factory clashed with hundreds of riot police sent to block a march from the factory to the Phnom Penh residence of Prime Minister Hun Sen, according to two human rights groups.

Workers from the factory, which makes clothing for Gap, H&M and other international brands, have been protesting for months for better working conditions and pay.

The violence erupted after police sent five officers to negotiate with the protesters, who surrounded and threatened to beat the policemen, said Chan Soveth, senior investigator for the rights group Adhoc.

It was unclear which side started the attacks, which included police firing live bullets and tear gas to rescue their colleagues, and protesters throwing rocks and wielding iron bars and wooden sticks, Chan Soveth said.

A woman selling rice near the protest was killed by a police bullet, Chan Soveth and Am Sam Ath of the rights group Licadho both said.

Six protesters were injured, Chan Soveth said, adding that five Buddhist monks were hurt when police fired tear gas into a Buddhist pagoda where demonstrators had sought refuge. Nine other people were hurt, including youths who jumped into the clashes and bystanders.

“The crackdown conducted by police this morning against workers was very cruel and unacceptable,” said Kong Athith, a spokesman for the Coalition of Cambodian Apparel Workers Democratic Union, which organized the protest. “Workers were unarmed. Why did police use live ammunition to crack down on them?”

National Police officials could not immediately be reached for comment.

The garment industry is Cambodia’s biggest export earner, employing about 500,000 people in more than 500 garment and shoe factories. In 2012, the Southeast Asian country shipped more $4 billion worth of products to the United States and Europe.

Pay is low and working conditions are usually uncomfortable. In May, the ceiling of a Cambodian footwear factory collapsed, killing two people and injuring seven.