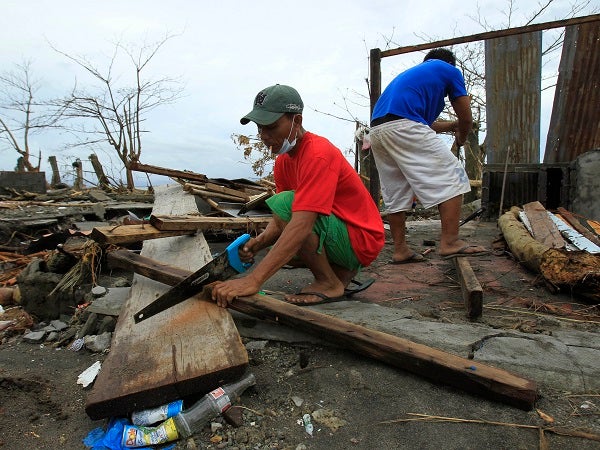 Four days after Typhoon Haiyan (local name: Yolanda) devastated islands in the central Philippines, survivors are desperate for food and clamoring to be evacuated. Here are some snapshots from the disaster zone:

— NO COMMUNICATION: The Philippine military says communication outages are making coordination with local government departments in hard-hit Tacloban city a major problem in the relief effort. Army Brig. Gen. Virgilio Espineli said, “We are organized. We have command and control. But how do we call the department of social welfare, the department of health, the department of public works and highways?”

— DEMINING NEEDED: A military armory just north of Tacloban airport’s tarmac was destroyed by the storm, which left explosives, grenades and military ordnance scattered around, some now buried in the mud. Military personnel are trying to keep people away, and at some point the area will need to be cleared.

— TRICKLE OF FOOD AID: Very little food aid has reached Tacloban. At the city’s airport, people crowded the destroyed terminal building and shouted at soldiers. “We are hungry,” one man said. “Please, please help us,” said another. A soldier yelled back that cargo planes were coming, and that people would be flown out.

— YOLANDA VS. HAIYAN: Philippine authorities gave Typhoon Haiyan a Filipino name, Typhoon Yolanda. That’s their policy because it is easier for local people to relate to Filipino names than foreign ones.

— DEAD BODIES: Many survivors expressed concern about dead bodies floating in the sea and lying on the ground. “They should be removed right away because all of us will get sick,” said 40-year-old Helen Cordial. Medical professionals say dead bodies are a negligible health hazard. “After a disaster, the top priority is look after the living. Rushing to bury the dead diverts resources away from rescue efforts and can make it impossible to identify bodies later,” the International Committee of the Red Cross says.