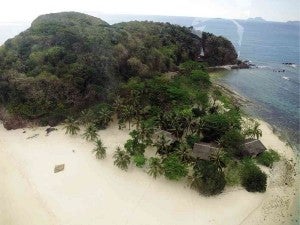 CORON, Palawan, Philippines — While it suffered relatively fewer casualties, Coron’s 45,000 people have only two days’ supply of rice and are in dire need of food, days after the island municipality was cut off from the rest of the archipelago on the final sweep of Supertyphoon Yolanda as it barreled across the Philippines’ midsection last Friday.

“What will happen if there’s no food?” Mayor Clara Reyes wondered in an interview, as she appealed to the national government to immediately send aid to the municipality.

At least 11 people, including a Dutch diver, died when “Yolanda” pummelled the municipality with heavy rain and strong winds Friday night before swirling to the West Philippine Sea.

The diver, 69, died when the boat he and a group of Dutch men and women were riding capsized off an island in Coron at the height of Yolanda’s fury, the mayor said.

“In the face of the storm’s fury, they were like a paper boat,” she said.

The other fatalities were fishermen whose boats capsized near the shore and residents, including twin infants, whose homes collapsed on them, she said.

The supertyphoon destroyed “85 percent” of the municipality’s homes, business establishments, crops, livestock and aquaculture. Officials estimated the damage at a minimum P5 billion.

Commercial flights were cancelled early Friday morning, stranding more than 400 foreign and local tourists, and resumed only on Monday. With “80 percent” of power lines toppled, power was shut down.

“We were isolated,” Reyes said in an interview inside the sweltering Coron coliseum behind the municipal hall where she supervised relief operations.

She said the National Food Authority in Coron had only 200 sacks of rice left, which was good for two days for 45,000. It didn’t help that 980 of the 1,000 registered fishing boats were damaged.

“That’s why we’re appealing to the media outlets. There’s so much attention on the Visayas region. Of course, they need more. But we hope they should not forget other areas hit by the storm, especially Coron. It’s really hard in Coron; we were totally isolated,” she said.

To deal with the dwindling food provisions, Reyes said, she planned to set up “soup kitchens” in all 23 villages by serving the victims with congee mixed with noodles in the morning and evening.

“In the US, they have the welfare houses where they serve hot meals. That’s what I’m trying to establish here. Of course we can’t provide three meals a day,” she said. “We can’t afford to cook viands.”

Sensing their boredom in the aftermath of the storm, Reyes said, she asked tourists to help pack relief goods that came from local businessmen. “Now there’s nothing to pack,” she said.

Reyes said it was not “her place” to directly call President Aquino. She said she has talked with Secretary Manuel Roxas II of the Department of Interior and Local Government.

To prevent prices from spiraling, she said, the local government would purchase all the rice, sugar and coffee that were left and other basic commodities and sell them at the right price.

Since power was down, the municipal government and the rest of the business establishments are now relying on generators. It may take two months before the power lines are rebuilt and become operational in the town proper.

Reyes admitted that the municipal government would soon run out of fuel for the generators. Each day, the government consumes two drums of fuel.

“If you see those drums,” she said, pointing to the entrance to the coliseum, “those are empty.”

“We’re appealing for fuel, diesel and regular gasoline. If there’s no fuel, everything will be halted, including relief operations.”

Four days after the storm, the town proper was now bustling with activity; the public market, retail stores, souvenir shops and hotels were open for business. The debris from fallen trees is slowly being cleared off the streets.

But the scars remain. From the air, one could see of streaks of brown —fallen trees whose leaves have turned brown—across the face of the island’s otherwise green mountains.

On getting off the airplane, the first thing a tourist would notice is the blown-off roof of the old terminal of the local airport, and then the missing glass walls that were shattered by Yolanda Friday night. The shards had been swept into a corner, but were still there.

The winding road to and from the airport in the middle of a vast expanse of green remained littered with fallen trees, and a stalled jeepney that turned on its side because of the strong winds.

“It’s the fiercest storm in memory,” said van driver Joselito Villoga, who saw the tin roof of his house partly blown off by the storm.