Commercial carriers, too, are planning relief efforts to affected areas, although reaching Tacloban City via its airport, where the passenger terminal was reportedly destroyed, has not yet been cleared for large jets, according to the air safety regulator.

Yolanda, one of the world’s strongest typhoons on record and likely one of its deadliest, struck the Philippines early Friday, knocking out power and communication lines in several parts of Visayas.

But in a statement Sunday,  Globe Telecom said it had set up one temporary cell site to serve local government units and agencies involved in disaster response.

Around 26 sites from Calbayog, Samar to northern Samar have also been repaired and brought back to operations, the telco, controlled by the Zobel family said.

While cell sites themselves were intact, Yolanda’s strong winds knocked down electric and communication poles where Globe’s fiber cables were placed, causing transmission links to fail, a Globe spokesperson said. 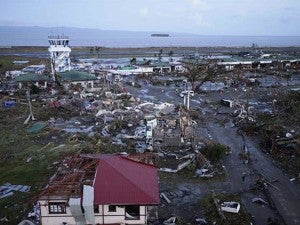 Smart Communications, a unit of Philippine Long Distance Telephone Co., said Sunday that while restoration of network facilities has been going on, the company has started its so-called Libreng Tawag satellite services in partnership with Telecoms Sans Frontieres.

“Tacloban is one of the most devastated areas in the Visayas with power and regular communication lines still down. Smart, as part of the Emergency Communications Cluster helping the government, flew in twice on Sunday, satellite and other telco equipment.” said Ramon Isberto, Smart public affairs group head.

“We’re doing our best to normalize operations in most areas. Lack of commercial electricity still remains a big challenge,” he added.

Budget airline AirAsia Zest, which is partly owned by Malaysia’s AirAsia Bhd., on Sunday said it conducted a humanitarian flight at 8 a.m. to Kalibo airport and has been trying to get a permit to fly relief goods to personnel to Tacloban.

C-130s have landed but larger jet planes, like those used by commercial carriers, are still not allowed “for safety purposes,” according to Andrews.