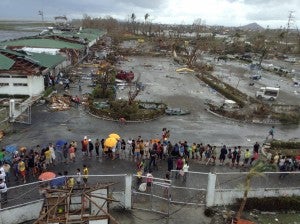 Eastern Samar Rep. Ben Evardone over Twitter announced the President’s arrival in the city before 11 a.m.

“PNoy (President Aquino) has already landed in Tacloban,” he said.

Radyo Inquirer 990AM said Aquino left Villamor Air Base in Pasay City at 8:40 a.m. on Sunday.

He is expected to distribute relief goods to residents of typhoon-devastated Tacloban City and meet with local officials. The officials and Cabinet secretaries earlier deployed in the province will brief him on the situation and the ongoing relief and rescue work.

Aquino was also scheduled to visit Roxas City in Capiz.

The provinces of Eastern Visayas are among the hardest-hit by super typhoon “Yolanda” which is now dubbed the world’s strongest typhoon of the year. In Leyte, at least 112 people were confirmed dead.

Aquino earlier assured the public that the government has enough funds to address the needs of the victims, including relief goods and restoration of communication lines in areas badly-hit by the typhoon.