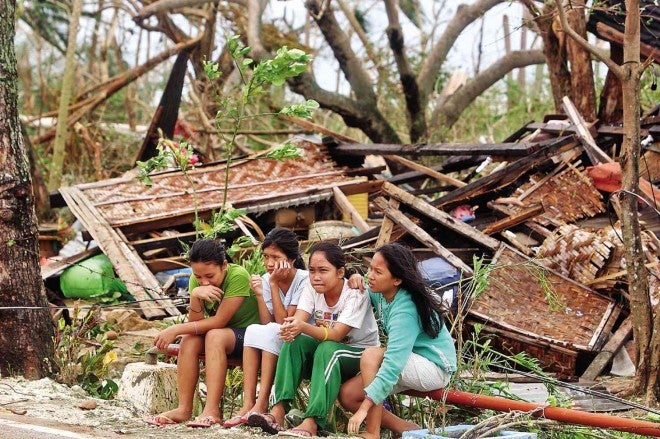 Images coming out of devastated areas, isolated on Friday by the breakdown of communication facilities, show the extent of the devastation caused by Supertyphoon “Yolanda.” Visayans, including these girls in Daanbantayan town in northern Cebu province, are still in a daze in the aftermath of the supertyphoon. TONEE DESPOJO/CEBU DAILY NEWS

President Benigno Aquino III on Saturday ordered the military and all search and rescue teams of the government to all the communities that suffered devastation as Supertyphoon “Yolanda” roared across the central Philippines on Friday.

Mr. Aquino gave instructions to find everyone—the survivors as well as the dead—deliver relief and reestablish communication, Cabinet Secretary Rene Almendras told reporters after a meeting of the national disaster council in Quezon City on Saturday.

With power and telephone networks down, many of the worst-hit areas remained cut off from communications on Friday, and it was impossible even for the government to determine the extent of the damage Yolanda had wrought in central Philippines.

Mr. Aquino met disaster officials on Saturday afternoon and gave fresh instructions to rush relief to the survivors of the typhoon.

But Mr. Aquino was not prepared to make an assessment of the damage caused by Yolanda.

“It’s hard to make an assessment because we have obtained incomplete data,” Mr. Aquino told a news conference.

Asked where the government would get the funds for the mammoth relief effort after Yolanda, Mr. Aquino referred to the “heavily criticized” calamity and contingency funds, the President’s Social Fund, and all other lump sums in the national budget.

The dwindling calamity and contingency funds stand at roughly P1 billion, while the social fund still has P6 billion.

Mr. Aquino said he would also draw from the quick reaction funds of the agencies.

“I’d like to assure everybody that although we have experienced many disasters—both man-made and natural—we have P16 billion in savings that [we can use for relief operations],” Mr. Aquino said.

The President hinted that he would take to task local officials in Leyte for failing to prepare for the supertyphoon. Tacloban City, the provincial capital, appeared to have taken the brunt of Yolanda’s fury, with at least 100 people reported killed. 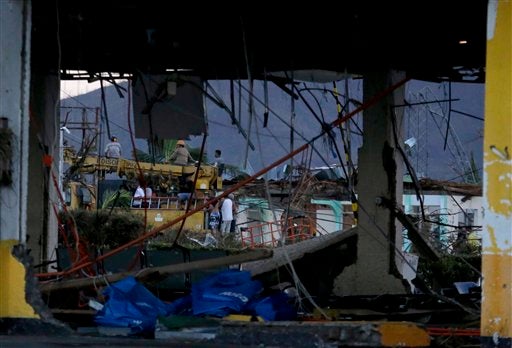 As of Saturday, the National Disaster Risk Reduction Management Council (NDRRMC) listed four people dead and four missing, but the Philippine Red Cross said it had estimated that more than 1,000 people were killed in Tacloban alone.

“The damage is significant. This is the time for all of us to help each other,” Almendras said at the NDRRMC briefing.

He said that the government was getting calls from private companies and individuals volunteering services and equipment for the disaster response.

Mr. Aquino also called up local officials and gave instructions to begin the implementation of response plans that had been prepared before Yolanda hit land early Friday.

Civil aviation authorities reported on Saturday that Yolanda killed at least 100 people and injured another 100 in Tacloban.

Almendras did not dispute the report, but said the death toll remained unconfirmed.

He said the NDRRMC “cannot give you a number [now]. It’s probably in that range as of now. As we speak, the [military] is helping in the recovery of the casualties in the Tacloban area,” Almendras said.

He said Mr. Aquino had called telecommunication companies to restore communications in central Philippines, but the lines remained down on Saturday.

Almendras said, however, that the telecommunication companies were “moving people and equipment” in Tacloban and other parts of the Visayas to reestablish communications. 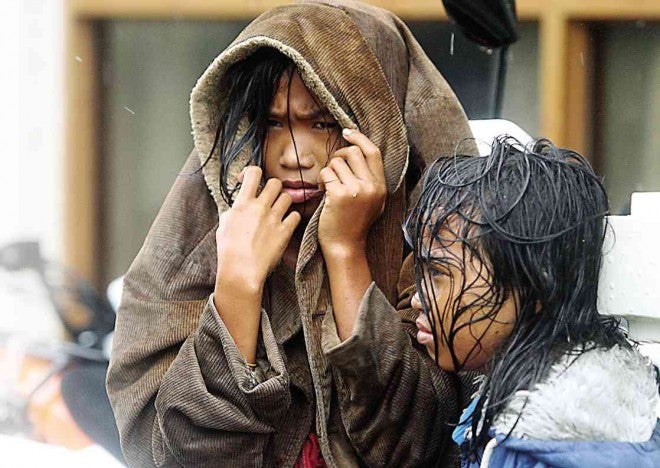 Rain soaked children (above) shiver at the evacuation center in Daanbantayan, northern Cebu, which was not spared by the typhoon’s wrath. TONEE DESPOJO/CEBU DAILY NEWS

“[On Friday] afternoon, the President talked to (Defense) Secretary (Voltaire) Gazmin when the satellite phones finally started working. The report was not good. [That] afternoon, we knew that Tacloban was badly [hit],” Almendras said.

The President ordered Gazmin and Interior Secretary Mar Roxas to Tacloban on Thursday to coordinate the government’s response to Yolanda.

“They walked around … and in the distance … they did see casualties,” Almendras said.

“It is hard to quantify because the extent of the area (reached by Gazmin and Roxas) is limited. At [present], the report of damage is significant,” he said.

Eastern Visayas appeared to have suffered heavier casualties than Western Visayas, he said.

In Western Visayas, six people were reported dead in Iloilo, four in Antique, three each in Aklan and Capiz, and six in Cebu.

Almost all houses in coastal or island villages were destroyed or damaged by Yolanda’s monster winds.

Fallen trees and electric posts blocked roads and rice fields were littered with roofing torn off from houses.

The howling winds did not spare churches, municipal and school buildings and other concrete structures.

After the strong winds, badly hit towns were threatened by flooding, with waters in higher areas rising.

In Negros Occidental, Gov. Alfredo Marañon Jr. wept on Saturday when he saw so many poor people rendered homeless in Cadiz City.

Aside from Cadiz, also badly hit in Negros Occidental were the cities of Sagay and Escalante and Toboso town, the provincial disaster council said.

A provincial social welfare office report said 59,209 people in 24 towns and cities were affected by the typhoon and 12,992 were staying in 193 evacuation centers.

In northern Cebu, at least seven towns remained isolated on Saturday after getting a whipping from Yolanda.

Local officials appealed for help, saying the extent of the devastation was “overwhelming.”

The provinces of Capiz, Aklan, Antique and Iloilo were placed under a state of calamity on Saturday to free calamity funds.

Cebu had already been declared under a state of calamity because of damage caused by a 7.2-magnitude earthquake that struck Central Visayas on Oct. 15.

Most of Panay Island was without electricity for the second day. Power was restored to parts of Iloilo City on Friday night.

Communication lines remained down and the national road connecting Iloilo with Aklan and Capiz was impassable, flooded and blocked by fallen trees.

He cited the island village of Malangabang in Concepcion town in Iloilo where at least 250 fishing boats were destroyed.

In the capital town of Kalibo in Aklan, the ABL Sports Complex, which served as an evacuation center and provincial command center, lost parts of its roof during the typhoon.

At least 11,461 houses were destroyed and 6,855 others were damaged, according to reports from 15 towns in Aklan.

Aklan Gov. Florencio Miraflores said it could take a month to fully restore electricity in the province.

At least 80 percent of houses and buildings, including the Immaculate Conception Metropolitan Cathedral and provincial capitol, were damaged or destroyed in Capiz, according to Gov. Victor Tanco. 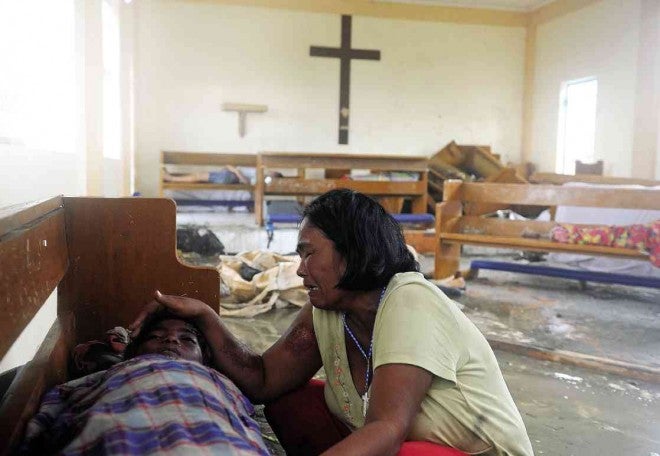 A mother (below) grieves over her dead son inside a chapel that barely withstood the onslaught of Supertyphoon “Yolanda.” AFP

The Red Cross said it was setting up welfare desks in badly hit areas to help survivors.

Gwendolyn Pang, Red Cross secretary general, said more than 1,000 bodies had been seen floating in Tacloban and 200 people had been reported dead in Samar.

“Our volunteers saw the [bodies in Tacloban], but they couldn’t determine how many,” Pang said.

The Philippine Coast Guard reported yesterday that a seafarer drowned after a tugboat sank in waters off Bauan town in Batangas at the height of the typhoon on Friday.

The Coast Guard identified the seaman as Roberto Pelicano, 58, a resident of Davao.

Another seafarer, Allan Rada, was injured in the accident, the Coast Guard said.