More areas placed under storm signal No. 4 due to ‘Yolanda’ 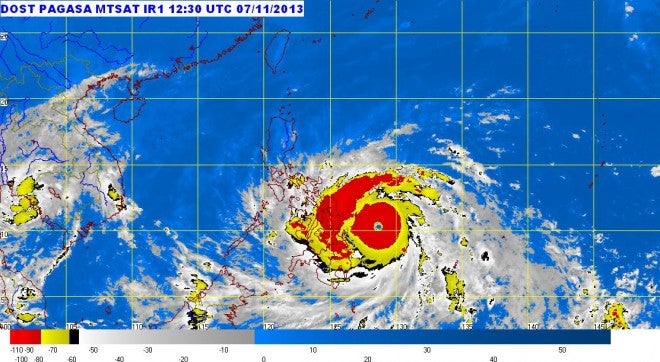 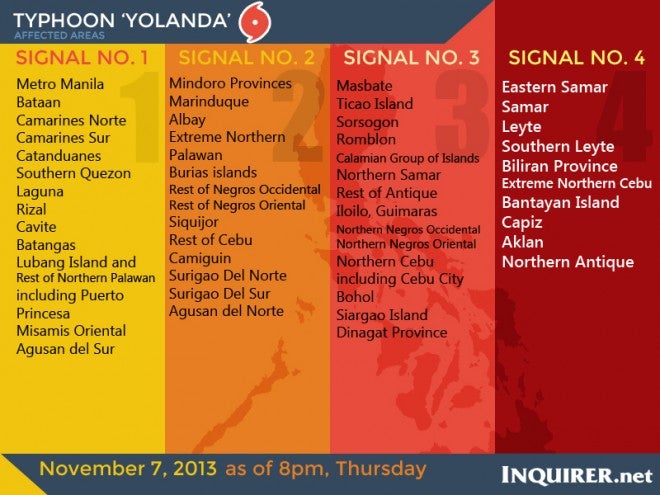 ‘Yolanda’ to hit land Friday morning in Eastern Visayas; Signal no. 4 up in 5 provinces

Yolanda, described by forecasters to be almost the size of the Visayas, is expected to make landfall Friday morning in the Eastern Visayas.

Forecasters from the Philippine Atmospheric, Geophysical and Astronomical Services Administration (PAGASA) forecasters said that Metro Manila would start feeling the effects of the 600 kilometer-diameter typhoon, light to moderate rains and gusty winds, by Friday evening.

PAGASA officials also warned of storm surges caused by the typhoon, which could generate waves with heights of up to 7 meters in coastal waters along Yolanda’s path.

In areas where signal 4 has been raised, PAGASA’s senior forecaster Jori Loiz said that the damage to the affected communities could be quite heavy and all travel and outdoor activities should be cancelled. “Evacuation to much safer shelters should have been completed earlier since it may be too late under this situation,” it added.

The typhoon would cross the provinces of Leyte, Biliran, the northern tip of Cebu, Iloilo, Capiz, Aklan, Romblon, Semirara Island, the southern part of Mindoro and Busuanga after making landfall, the forecaster said. It is expected to leave the landmass on early morning Saturday towards the west Philippine Sea.

According to the weather forecaster, the estimated amount of rainfall is from 30 mm per hour to 50 mm per hour in areas on the massive typhoon’s path. “That is beyond torrential levels,” he told the Philippine Daily Inquirer, adding that the typhoon has been moving very fast but has not changed track since its approach to the Philippine area of responsibility.

“It will be both strong winds and torrential rains in areas of Southern Luzon, the Visayas and Mindanao. But in Metro Manila, the typhoon’s outer cloud bands would bring light to moderate rains and gusty winds,” Loiz said.

Forecasters said that in Metro Manila, storm signal warning 1 or 2 might be raised by Saturday morning.

More areas placed under storm signal No. 4 due to ‘Yolanda’ 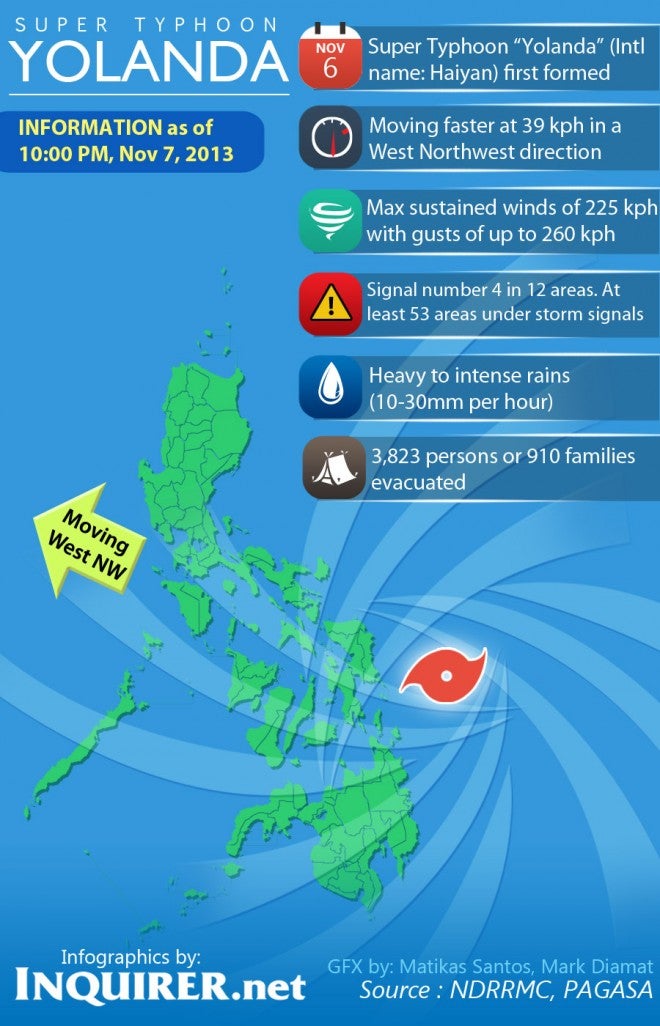