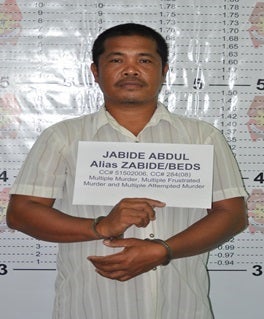 MANILA, Philippines—A leader of a notorious terrorist group believed to be responsible in several bomb attacks in Central Mindanao since 2006 that killed 31 persons and wounded more than a hundred others, has been arrested by police authorities in Sultan Kudarat, a Philippine National Police official said Thursday.

A P3.3-million reward was offered for information leading to his arrest.

Chief Superintendent Abelardo Villacorta, Director of the PNP Intelligence Group said Al Khobar is a group of extortionists believed to be based in the marshlands of Maguindanao and is responsible for the spate of bombings in the central Mindanao region since 2006.

“The group was allegedly created in support of Jemaah Islamiya (JI) and Foreign Militant Jihadists (FMJ) groups. It was intended to serve as a special unit concentrating on explosive component use and extortion schemes across Cotabato areas,” Villacorta said, adding that the group first turned into a kidnap-for-ransom group before it became an extortion group.

Al Khobar is known to target businesses and even local governments in the central Mindanao region, Villacorta said, noting that it has been blamed for the series of bomb attacks on bus companies and commercial establishments in the region from 2007 to 2009.

“A member of the group usually calls the target before the attack and demands ‘protection money’ to prevent such planned attack on their business. If the money is not paid, an attack is carried out,” the police official said.

Al-Khobar Group is allegedly responsible for the following attacks:

1. October 10, 2006 bombing of a crowded in Makilala, North Cotabato during the town’s founding anniuversary. 6 killed, 40 wounded

Al-Khobar owns up another bombing