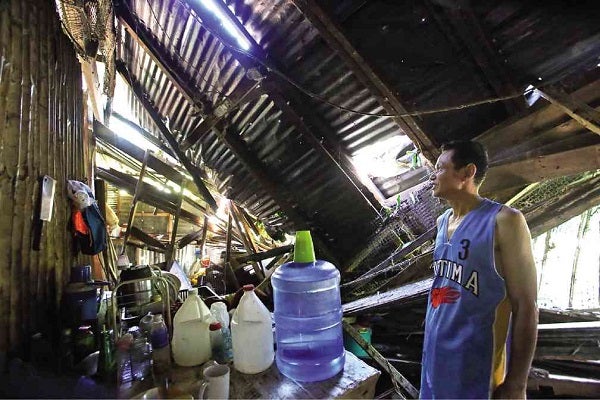 MACARIO Cuizon Jr. checks the damage left by a tornado on his and his co-workers’ bunkhouse in Compostela, Cebu. JUNJIE MENDOZA/CEBU DAILY NEWS

In Cebu, at least 35 houses were damaged and nine persons suffered injuries in Mandaue City, Lapu-Lapu City and Compostela town.

Oscar Tabada, head of the Philippine Atmospheric Geophysical and Astronomical Services Administration (Pagasa) in the Visayas, said the tornadoes were offshoots of severe thunderstorms brought by Tropical Depression “Wilma.”

He said a tornado was also reported in Dulag, Leyte province, around the same time.

In Mandaue City, authorities said at least 18 houses were damaged in the village of Looc.

At least four of those hurt were passengers of a vehicle that was lifted off the ground and thrown back by the tornado’s 200 kilometer per hour wind.

Residents who had been displaced are now staying in tents, said Paller.

In Iloilo, a tornado ripped through four towns also on Monday, destroying 68 houses and damaging 122 others, according to reports reaching the Iloilo Provincial Disasters Risk Reduction and Management Office.

No casualties were reported but the tornado, which lasted for about an hour, destroyed or damaged fish pens and fishing boats and displaced up to 900 people.

The town of Pavia was hardest hit where 39 houses were destroyed and 85 others were damaged.