Typhoon Haiyan based on the satellite image of Project NOAH as of 5:20 p.m. Wednesday.

MANILA, Philippines – Preparing for the worst and hoping for the best, local governments and institutions are now busy preparing for supertyphoon “Haiyan” which is expected to enter the Philippine area of responsibility within the next 24 hours.

The Department of Education (DepEd) and the respective provincial governments of Cebu, Bohol and Albay announced the suspension of classes in all levels starting November 7, after the Philippine Atmospheric Geophysical and astronomical Services Administration (Pagasa) said the typhoon would hit Visayas and parts of Luzon and Mindanao. 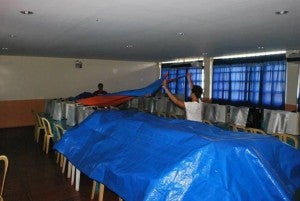 Disaster councils were also activated in Eastern and Central Visayas, with the identification of flood-prone areas and alternative evacuation centers.

Pagasa said that “Haiyan,” which will be named “Yolanda” once it enters the Philippine area of responsibility, would first make a landfall in the Samar-Leyte area.

“When the [typhoon] enters the Philippine Area of Responsibility, the LGUs should advised the local fisher folks and local vessels and residents in the coastal barangays about the no sailing, no fishing policy,” it said in a statement.

It also advised the use of new school buildings, “which are already typhoon-proof and have more water and sanitation facilities,” as evacuation centers.

In Albay, Governor Joey Salceda told the local disaster council to mitigate the effects of the storm on the lives and properties of the residents. 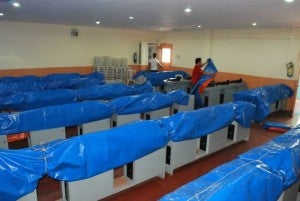 “This coming Friday and Saturday are the most critical time for Bicol region, as the storm is expected to land fall on Friday morning while it is closest to Albay in the evening of the same day,” Salceda said in a statement.

He said they would carry out pre-emptive evacuation in landslide- and flood-prone areas on Thursday.

He warned those living near riverbanks, lahar flow paths and mountain slopes to prepare evacuation kits and identify their route to the nearest evacuation camp.

People were also quick to share on social networks their preparations for the storm.

Employees of the Aquinas University of Legazpi posted photos on Facebook showing their IT personnel securing computers by covering them in waterproof material.

Meanwhile, the Philippine Coast Guard showed off on Twitter their newly-acquired rubber and aluminum boats, which they will use as rescue units.

Residents in path of supertyphoon told to evacuate