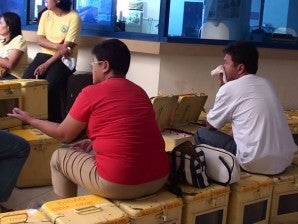 MANILA, Philippines—The honoraria due public-school teachers who were asked to man the polls during the barangay (village) elections last month are late once again, a teachers’ group said Wednesday.

The Teachers’ Dignity Coalition reported that in Metro Manila, some teachers who served in the October 28 barangay elections still had to receive their allowances from the Commission on Elections.

“Up to now there are some teachers in Caloocan, Quezon City, Marikina, Maynila, Pasay, Mandaluyong, San Juan and Las Piñas who still have not received their allowance,” TDC national chairman Benjo Basas said.

“Whatever the reason for the delay is, it’s not the fault of the teachers,” he added.

Public school teachers manned the voting precincts as chairmen and members of the board of election tellers, for which they were promised a P2,500 honorarium each.

Basas said they also learned that some teachers who served as BET chairmen have also not received their additional honorarium for serving as members of the Barangay Board of Canvassers, which had the duty proclaiming the winning barangay candidates.

The teachers who served on the BBOCs were promised an honorarium of between P1,000 and P2,000 depending on the size of the clustered precincts.

Election supervisors were supposed to receive P1,000 each while the support staff were promised P500 each.

The additional P300 that Comelec suggested to pacify teachers’ protests over the low honorarium did not push through.

Basas said it was bad enough that the honorarium was “too small” for the work rendered by the teachers.

“All of them worked more than 24 hours non-stop (on election day). They deserve to be compensated properly and on time. It should not be delayed as our teachers are experiencing again,” he said.

Not this time, teachers tell Comelec

Teachers on poll duty may not be able to vote