Not this time, teachers tell Comelec 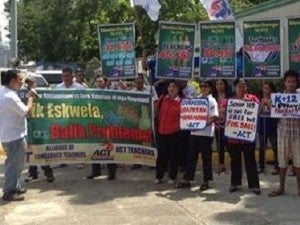 Alliance of Concerned Teachers stage a protes in this file photo. ACT has threatened to refuse to go on election duty for the Oct. 28 barangay and Sangguniang Kabataan elections unless they are properly compensated. PHOTO FROM ACT-TEACHERS.COM

MANILA, Philippines—A group of public school teachers has warned that most of their colleagues would refuse to go on election duty for the Oct. 28 barangay (village) and Sangguniang Kabataan (SK) elections unless they are properly compensated.

Benjie Valbuena, national chair of the Alliance of Concerned Teachers (ACT), said majority of the 55,000 public school teachers in Metro Manila alone would refuse to sign their appointment papers as members of the Board of Election Tellers (BET) because the Commission on Elections (Comelec) further lowered their honoraria.

Under Comelec Resolution No. 9751 promulgated on Aug. 5, the poll body set the teachers’ election duty honoraria at P3,000 each, consisting of P2,000 for handling barangay precincts, a P500 transportation allowance and an additional P500 for handling SK precincts.

In the last May 13 national elections, which were automated, public school teachers who served on the Board of Election Inspectors were given an honoraria of P4,000.

“[The allowance] should not be lower than the previous one. It’s more difficult to handle manual elections,” said Valbuena, adding that barangay elections were “more disorderly.”

He said the previous P4,000 honoraria was not enough today to compensate the teachers for their heroic efforts in manning election precincts.

Valbuena estimated that majority of the teachers nationwide would refuse to sign their appointment as BET members this time around.

“Our position is that there should be no sanction since we will not sign [the appointment papers] in the first place,” he said.

In Resolution 9751, the Comelec said that “in case there are not enough public school teachers, teachers in private schools, employees in the civil service or other citizens of known probity and competence who are registered voters of the city/municipality may be appointed for election duty.”

After the May 13 elections, teachers experienced delays in the release of their honoraria.

The Comelec and the Department of Education arranged for them to receive their honoraria through bank-issued “cash cards” or through their Landbank ATM payroll accounts.