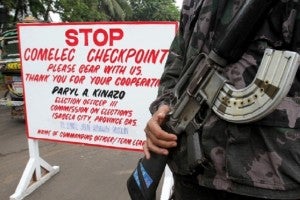 MANILA, Philippines—With less than a week left for the Commission on Election’s gun ban rule, the Philippine National Police said the number of arrested violators has reached to almost 750 persons, a PNP official said Wednesday.

Police Senior Superintendent Wilben Mayor, PNP spokesman, said that as of 7:53 a.m., 739 persons, mostly civilians, have been apprehended since the implementation of the Comelec gun ban last September 27 in connection with the recently concluded barangay (village) elections.

Among them were 680 civilians, 28 security guards, three members of the Civilian Armed Forces Geographical Unit, and one from an unspecified law enforcement agency. Nine each from the PNP, Armed Forces of the Philippines, and unspecified government offices were also arrested.

The gun ban rule will end on November 12.

The prohibition from carrying firearms has been implemented by the PNP and other law enforcement agencies during the election period from September 28 to November 12, or 30 days before, and 15 days after the October 28 village elections.

“Police units will continue to enforce election laws, particularly the election gun ban that is enforced until November 12,” Mayor said.