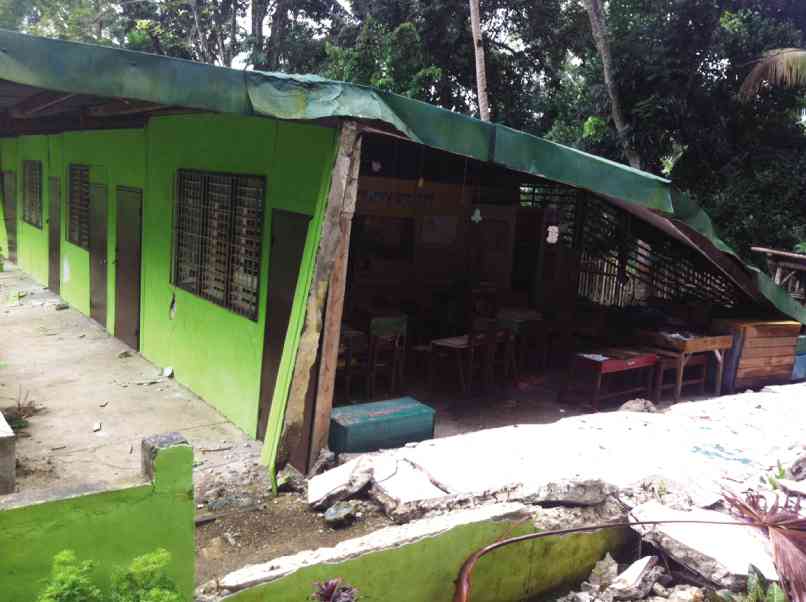 WITH the Obujan Tagubaas Elementary School rooms in Antequera town sustaining damage due to the 7.2-magnitude earthquake, classes have to be held under tents. CARMEL LOISE MATUS/INQUIRER VISAYAS

PANGANGAN ISLAND, Calape, Bohol—The teachers of Pangangan Elementary School will be holding classes on a 1,523-square-meter lot using tents as temporary classrooms after three sinkholes appeared at the school grounds.

The resumption of classes was set for Tuesday but the Department of Education (DepEd), in consultation with the Philippine Atmospheric, Geophysical and Astronomical Services Administration, and the Bohol Provincial Disaster Risk Reduction and Management Council (PDRRMC), suspended the classes for elementary and high school due to Tropical Depression “Wilma.”

The third sinkhole, located at the back of a high school building, ate up more than half of a 10-foot kapok tree.

The Mines and Geosciences Bureau (MGB) had reported the school was sitting on cave chambers.

Atabelo told the Inquirer they would have to fit 456 children in 13 big makeshift tents, which was set up by the residents and barangay officials.

But rain threatened the schoolchildren, as the tents could cover only a class with at least 30 pupils. The tents were donated by a Japanese group and their own parish, Atabelo said.

While the space may be enough for the elementary pupils, shifting would have to be implemented for the 396 students of Pangangan National High School.

High school principal Leona Cagande told the Inquirer seven tents would not be enough for their 14 classes.

Cagande said they would hold only classes for Grades 7 and 8 on a Monday-Wednesday-Friday schedule while the third and fourth year high school pupils would hold classes on a Tuesday-Thursday-Saturday schedule.

“If we can get more tents, we will return to the five-day class schedule,” Cagande said.

In Antequera town, teachers and parents were looking for alternative areas where they could hold classes after the 7.2-magnitude quake destroyed some of their classrooms.

Nimfa Ayco, a Grade 5 teacher in Obujan Tagubaas Elementary School, said the parents and teachers had identified a vacant lot 10 meters from the damaged school.

Ayco said the parents wanted a safer place where their children could easily evacuate in case of aftershocks.

The Bohol PDRRMC had listed 14 destroyed schools in seven municipalities, including those in Antequera.